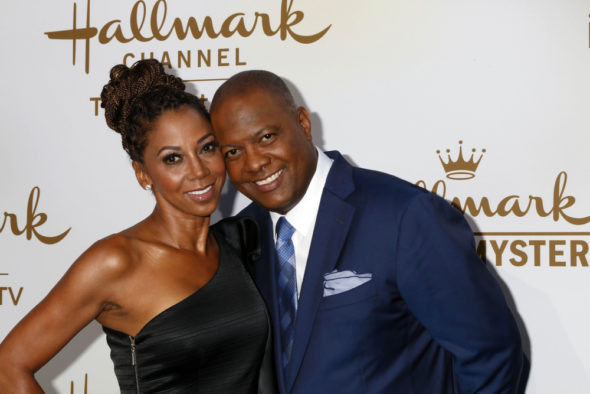 The Peetes are ready for their close-up. Recently, Hallmark Channel announced production has begun on their new TV show Meet the Peetes.

The docuseries “follows the lives of actress and activist Holly Robinson Peete and her husband Rodney Peete, a star in the NFL for 16 years.” Meet the Peetes is slated to debut on Hallmark Channel in February 2018.

Studio City, CA – October 11, 2017 – Having achieved great success with original primetime series, Hallmark Channel expands its original programming slate by commencing production on its first primetime reality series, “Meet the Peetes.” The series follows the lives of actress and activist Holly Robinson Peete and her husband Rodney Peete, a star in the NFL for 16 years. Each episode chronicles their lives as they navigate the waters of raising kids and dealing with the same trials and tribulations facing many American families. The show will premiere February 2018 on Hallmark Channel.

“We are thrilled to commence production on ‘Meet The Peetes’ and follow the heartfelt journey of the Peete family,” said Michelle Vicary, Executive Vice President, Programming and Network Publicity, Crown Media Family Networks. “Their stories centered on family, generosity and love embody our brand and is the perfect fit for our network.”

In “Meet the Peetes,” audiences will see Holly and Rodney’s hectic lives as they attempt to balance raising four kids, including one with autism, running their HollyRod charity and spending time with Holly’s 81-year-old mother Dolores, who moved in with them after retiring from her career as a talent manager. With daughter Ryan in college at New York University, their son with autism RJ working for the Los Angeles Dodgers he decides he’s ready to leave the family nest. On top of that, Holly’s mother Dolores announces she’s ready to move out too – the Peetes are in a period of change that will continue to unfold in “Meet the Peetes” only on Hallmark Channel.

“We are so excited to start production on ‘Meet The Peetes’ and open our home and hearts to Hallmark Channel,” said Holly Robinson Peete. “We have so many stories to tell and experiences to share that families can relate to, and we know our journey will resonate with viewers.”

What do you think? Do you watch the Hallmark Channel? Will you check out Meet the Peetes?

Yes, My whole family will be watching Meet The Peetes. I am so glad Hallmark has committed to showing a positive reality show. I am excited to view each episode following the daily lives of this amazing family. Delores is great at 81 years young.

Yes I will be watching!! Don’t forget her mom!!
This will be good!

Yes, I will watch this show. I know Rodney as he was in the same class as my daughter and niece when he attended high school in Tucson, AZ. I also worked in the attendance office in the same school at that time.

Love the Pete’s. This is one of my favorite shows.