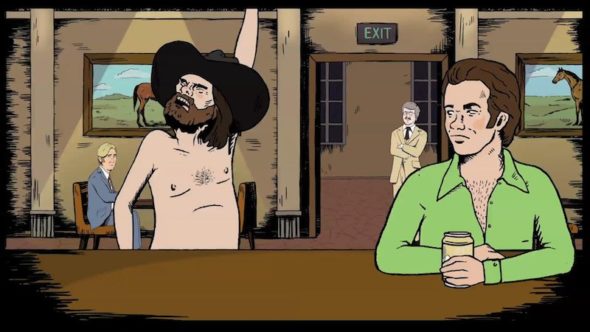 Tales from the Tour Bus is back for another crazy ride. Cinemax just announced the TV show’s second season will premiere in November.

From Mike Judge, the animated series “features animated interviews with former bandmates, friends and other erstwhile associates, who share uncensored anecdotes about these artists, brought to life by animated reenactments, and woven together with live-action archival performance footage and photos.”

Season two of Mike Judge Presents: Tales from the Tour Bus premieres on Cinemax on November 2nd at 10 p.m. ET/PT. 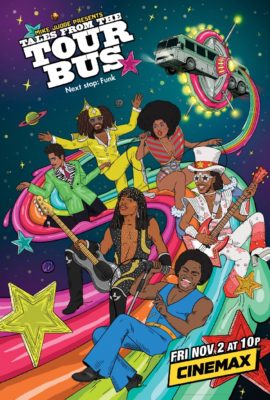 Marking a return to his roots in animation and as a musician, Judge (“King of the Hill”; “Beavis and Butt-Head”; Emmy® nominee for HBO’s “Silicon Valley”) co-created, narrates and serves as an executive producer on the series, which recounts the raucous adventures of these musicians, as told by those who knew them best.

TALES FROM THE TOUR BUS features animated interviews with former bandmates, friends and other erstwhile associates, who share uncensored anecdotes about the artists, brought to life by animated reenactments, and woven together with live-action archival performance footage and photos.

Debut date: FRIDAY, NOV. 2 (10:00–10:30 p.m. ET/PT)
A cornerstone figure in funk music, George Clinton went from singing a capella in a barbershop to chasing Motown glory in Detroit with his band, The Parliaments. But the introduction of LSD took him to the next level, as he built a funk empire with outrageous costumes, frequent band-name changes and an occasional bit of nudity. From his first hit, “(I Wanna) Testify,” to the smash anthem “Tear the Roof Off the Sucker (Give Up the Funk),” Clinton forged a lasting sound that went on to fuel a whole new genre: hip-hop.
Written by Mark Monroe and Mike Judge; directed by Mike Judge.

Debut date: FRIDAY, NOV. 9 (10:00–10:30 p.m. ET/PT)
The self-proclaimed “King of Punk Funk,” Rick James came from humble beginnings in Buffalo before hooking up with Neil Young while dodging the draft in Canada. With a penchant for pyrotechnics, glitter, custom boots and marijuana, his quest to become a black rock star reached its apex when a throwaway song, “Super Freak,” topped the charts and gave him the fame he’d dreamed of.
Written by Mark Monroe and Mike Judge; directed by Mike Judge.

Debut date: FRIDAY, NOV. 16 (10:00–10:30 p.m. ET/PT)
In the mid-‘80s, funk star Rick James was riding high on top of the music world. But between his rivalry with Prince, crusade against MTV and run-ins with the law, he fell further under the influence of cocaine. Even a shot at a comeback, when M.C. Hammer sampled his greatest hit, couldn’t pull James back from the brink.
Written by Mark Monroe and Mike Judge; directed by Mike Judge.

The Los Angeles Times described the series as “addictive,” while Decider called the show “unlike anything you’ve ever seen before,” Rolling Stone hailed it as “informative as it is hilariously raw” and A.V. Club termed the series “storytelling gold.”

What do you think? Have you seen Tales from the Tour Bus? Will you check out season two?