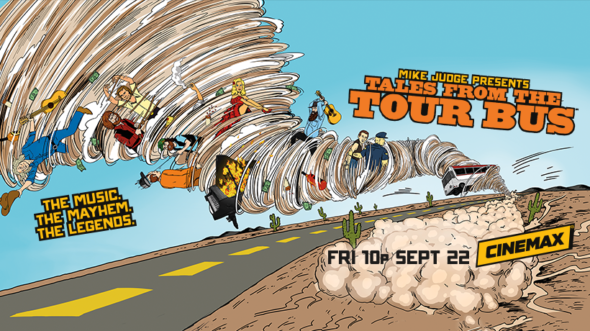 TV show description:
On the animated Mike Judge Presents: Tales from the Tour Bus TV show, co-creator and narrator Judge recounts the stories from illustrious country and western music artists. The series features the rowdy exploits of these stars, from the points of view of their closest companions.

What do you think? Do you like the Mike Judge Presents: Tales from the Tour Bus TV series? Should this TV show be cancelled or renewed for another season on Cinemax?

Loved this show informative and entertaining shines light on great talent that should never be forgotten. Supposed it would be cancelled in the fact that it highlights some of the crazier antics of REAL country stars that society today just can’t appreciate. Damn shame

I was A HUGE FAN OF TALES FROM THE TOUR BUS!!! I see it’s now cancelled!?! That really does suck!! I have watched every episode twice and the Waylon and George Jones episodes 3 times each!! Man I was really looking forward to more to come!! It brought back the family memories of my dad and even my own. It really was an AWESOME series.