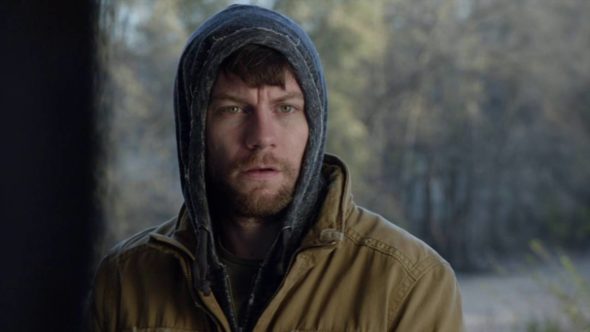 Cinemax is saying goodbye to Outcast. Deadline reports the network has cancelled the TV show after two seasons.

Ratings have never been strong for Outcast and season two was no different. The Cinemax series, which just wrapped its second season, earned an average rating of .04 in the 18-49 demo and only 110,000 viewers.

What do you think? Have you seen Outcast? Do you think it deserved a third season?

How disappointing… to end it with his mom FINALLY waking up and just ending it right there, with no intention of making a season 3?!
These kinds of things just gets under my skin and bugs the crap out of me. It needs to be continued period

My sentiments exactly! For F’s sake, at least film a REAL finale that answers all the show’s questions & gives its viewers a sense of closure. When Twin Peaks was canceled after 2 seasons (actually 1 1/2), in 1991, the creator David Lynch wrote “Twin Peaks: Fire Walk with Me” movie in 1992, which effectively & beautifully brought the story full circle in appropriate, dramatic fashion. THEN Twin Peaks came back 25 yrs later in a limited series (2017) as was intimated by a major character in the ‘92 movie to wrap up the whole sequence of events (you’d understand… Read more »

Dang. I feel the same. Keep wishing another platform would pick it up and continue . I’ll finish up w the comic series

People don’t normally watch Cinemax because it’s known for skinemax and not very good movies no one knew the show was even on or it would have had many more of viewers if it was on a regular station please please his mom woke up and then u end it are u serious!!!!!

I don’t get why they canceled this show. It was good. Disappointed.

Why start something that you have no attend to finish. Hate that.

Added Cinemax just to watch this show. Didn’t know it was only two seasons… BUMMER!!!

By far one of the best tv shows on Cinemax, too bad!

Yep…. PS CINEMAX SUX ANYWAY. Overpriced GARBAGE shows, and they cancel the ONE show they had going for them as far as MY viewership is concerned.