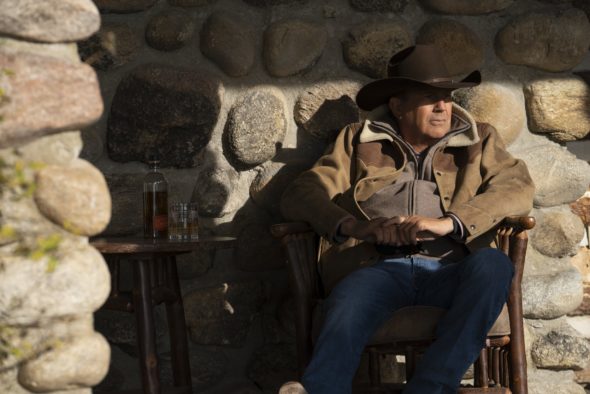 Will this show’s popularity continue to grow? Has the Yellowstone TV show been cancelled or renewed for a fifth season on Paramount Network? The television vulture is watching all the latest cancellation and renewal news, so this page is the place to track the status of Yellowstone, season five. Bookmark it, or subscribe for the latest updates. Remember, the television vulture is watching your shows. Are you?

While these numbers don’t include further delayed or streaming viewing, they are a very good indicator of how a show is performing, especially when compared to others on the same channel. Other economic factors can be involved in a show’s fate, but typically, the higher-rated series are renewed and the lower-rated ones are cancelled. Find out how Yellowstone stacks up against other Paramount Network TV shows.

Will Paramount Network cancel or renew Yellowstone for season five? The show is incredibly popular and has inspired two new Paramount+ exclusive series, Mayor of Kingstown and 1883. I do not doubt that Yellowstone will be renewed for year five. I’ll update this page with breaking developments. Subscribe for free alerts on Yellowstone cancellation or renewal news.

2/3/22 update: Yellowstone has been renewed for a fifth season on Paramount Network.

What do you think? Are you glad that the Yellowstone TV show has been renewed for a fifth season? How would you feel if Paramount Network had cancelled this TV series instead?

I really enjoy watching the Yellowstone storyline. Can’t wait for season 5!! Hurry up and come back! Thanks

I love Yellowstone, been a fav since the beginning, The season started out with a bang! Loved it. but the final 2 episodes of the seasons were clearly taped later than others and seemed rushed & stupid. Actually had to fast forward through a lot. Very underwhelming. Jimmy goes from a fool to a wisdom filled “real cowboy” in one season? Really? The life sentence in jail was dumb. The sad song accompanied by the guitar was out of character for Beth. The intelligent quips they give the 2 kid characters would never be heard coming out of a kid’s… Read more »

Love Yellowstone. Best show in years. Paramount should definitely renew for season 5 and for a full season not 10 episodes. I’m sure lots of other networks would be happy to pick it up.

Love Yellowstone, Paramount will make a big mistake cancelling it. Most people in our friends circle feel the same way. 70-80’s. We even watch Dr. Pol’s, Dr Oakley. Not wild about the newer shows, To much like movie stars than real Vets. Especially that Beach Vet, lost interest after a couple of shows, to fake.

Do not cancel Yellowstone

A Paramount wants to cancel Yellowstone let him go to another mainstream television station and do a real full season.

Great show. Look forward to every episode. Really hope to hear that it is renewed for a fifth season, sixth season, and more.

I am disappointed in the writers that the language has gotten so much worse. I and many people I know will not continue to watch.

All the stuff that happens on the show and your complaining on the bad language …SMH the show is amazing just the way it is!

It gives a warning Strong Langue. Which predominates most shows. This is not Little House on the Prairie.

I would love Yellowstone 5 and many more years please stay on Paramount. I can’t do any streaming can’t afford it.

We are the same way, can’t afford streaming or we’d get 1883. With price rises in food, medicine, getting streaming is not feasible. We are down to old movies as this seasons are OFFENSIVE with pushing that WOKE agenda. We can go to antenna and watch old shows.

This is a great show