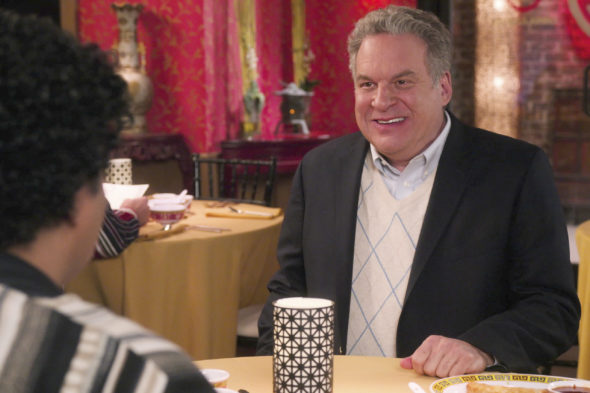 The Goldbergs crew has figured out how to deal with the sudden departure of actor Jeff Garlin from the comedy series. Garlin had just one day left of filming on the ninth season’s original 18-episode order. ABC subsequently ordered four additional installments.

Garlin left the series earlier this month after multiple misconduct allegations and HR investigations. The actor was already on a reduced filming schedule this season. He would often come to the set just one day a week to film his scenes.

Though he departed before all episodes were filmed, ABC viewers will continue to see Garlin throughout the entire season. Footage of Garlin that had already been shot will be used in the additional episodes, paired with off-camera dialogue, per Variety. Garlin’s stand-in will also be used, from the back, in group scenes.

Starring Wendi McLendon-Covey, Sean Giambrone, Troy Gentile, Hayley Orrantia, Sam Lerner, and Patton Oswalt (voice), the series will return from its winter hiatus on January 5th. It is unknown if the comedy will be renewed for season 10.

What do you think? Are you planning to watch the rest of season nine of The Goldbergs on ABC? Do you think that it will be renewed?

When cast members leave, shows are NEVER the same . You can not replace the person . I wasn’t a regular watcher , on and off .

Not sure. I still feel that this show has run its course.

The show has overstayed it’s welcome already. It needs to be cancelled. And Adam Goldberg didn’t know Garlin was a problem after all these many years?

After 9 years they find out he’s an ass?

Shame Jeff Garlin did to himself. Will be missed.

It’s time for this show to go away.