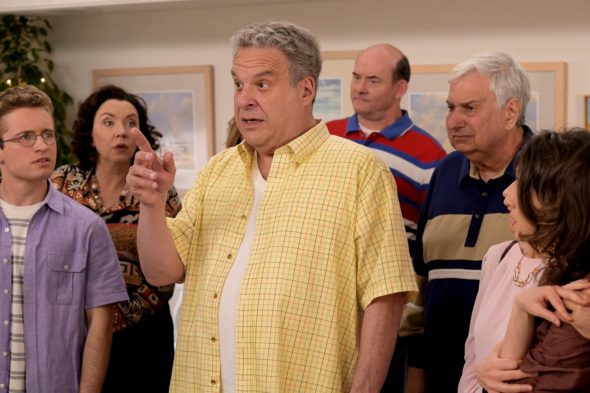 If The Goldbergs is renewed for a 10th season, Jeff Garlin won’t be a part of it. The actor has left the ABC comedy series effective immediately following multiple misconduct allegations and HR investigations. A mutual agreement is reported to have been reached between Garlin and Sony Pictures Television.

The actor had been working on a reduced schedule to limit his number of days on set. Word is that he had one day of shooting remaining on the original 18-episode order. His double was used to fill in for that day. An additional four episodes have now been ordered so, Garlin obviously won’t be in them.

Deadline reports that several current and former co-workers talked about how the show has a great work environment but that changed on the days that Garlin worked on the set.

According to a source on the show, a camera assistant made a complaint to her department head about Garlin’s use of the word [vagina]. After the actor found out, he reportedly put his hands around her and kept saying “vagina” in her face over and over again. Overall, Garlin’s go-to jokes that a number of people on the show found offensive were talking about grandma’s vagina, balls and brassier, a co-worker said. Additionally, he would not address some longtime female crew members by name, using instead nicknames that some also considered offensive.

In a long Vanity Fair interview, which was published nearly two weeks ago, Garlin addressed allegations of inappropriate conduct. In the piece, he acknowledged that HR had come to him three years in a row regarding his behavior but, generally dismissed the accusations.

“I’m not going to go over it because I don’t want to, but basically a lot of things that I disagree with—that are silly. If I said something silly and offensive, and I’m working at an insurance company, I think it’s a different situation. If I, as the star of the show, demanded a gun range and on set, and I was firing guns every day and I was a little bit loose—to me, that’s an unsafe work atmosphere. If I threatened people, that’s an unsafe work atmosphere. None of that goes on ever with me. That’s not who I am. I am sorry to tell you that there really is no big story.”

Garlin considered not returning for the current ninth season. He explained:

“Just because I was bored. No other reason. Well, bored, and I was frustrated with the parameters that were being put on me by Sony, which they have every right to [enact]. And I have every right when I’m not under contract to decide not to come back. That’s all it was. But I love the people I work with and I didn’t want the work to end for them. So I did my part in keeping the show going, even though I would have been happy not doing the show.”

According to Deadline, executives came to The Goldbergs set to congratulate the cast and crew for reaching the 200 episode milestone. They also addressed Garlin’s departure and one person noted, “It feels a little surreal that he will never be here again but the mood on the set is ecstatic. In fact, several people cheered…”

While The Goldbergs is one of ABC’s highest-rated comedies and kicks off Wednesday nights, its future is unknown. In the Vanity Fair interview, Garlin said:

“I actually have no idea. Usually they would give us an idea, ‘Yeah, we’re definitely bringing you back.’ And the fact that we’re the first show of the night, and we’re very popular and we set the tone for everybody else. But we’re in a world where ABC doesn’t own the show. Sony does, they own the other shows of that night. So it’s about money and the bottom line. That’s all.”

If the show is renewed, it’s unclear how they’ll deal with Garlin’s departure and how to handle his character of patriarch Murray Goldberg. The show is based on series creator Adam Goldberg’s life and his real father passed away in 2008 at the age of 67.

What do you think? Do you enjoy watching The Goldbergs on ABC? Are you disappointed that Garlin has left the series? Are you hoping that it’s renewed for a 10th season?

Although I enjoyed the show , if he is not on it , they should let it go .

That’s the thing with American shows. They don’t know when to stop, and ruin everything else.

I lost any affection I had for him when he went on talkshows bragging about what a pothead he is. I kind of expected this might happen, but he brought it on himself.

It’s time to end this once funny show. The mother is way too over the top .

Totally ridiculous! People are so pitiful! Ruined a great show being silly!

I think they should end the show already. It’s supposed to be based in the 1980s, and when you do a “flashback” show of that nature, it really doesn’t work when you run out of years for the appropriate decade. (for example, “Happy Days didn’t REALLY “jump the shark” when Fonzie literally jumped a shark, but it damned sure did when it became a 60s show and made references to the Beatles, the Vietnam war, etc. ) Ending the series with Adam graduating from high school and moving off to NYC for college would be the obvious way to go.… Read more »

This show has run its course, even before the problems with Jeff Garlin. The laughs are few and far between. Once the “kids” got too old for the show, the scripts died with them. Time to move on. Sure miss Pops, George Segal. He was a tremendous asset.

My husband loves this show. But I cant stand it. Have never seen an episode. Just judging by ads about it. It looks so stupid. How it has stayed on the air this long is beyond understanding. Hopefully this actors departure is the demise of the show.

Melinda has never seen the show but can’t stand it. Huh?

Hopefully the show can go on and it still be entertaining with out one of the main characters. There’s still a lot of comedy without him! Hopefully it stays on!

He sounds like an A**hole. I generally like the show, but feel bad for all the women who had to put up with his disrespect and frankly physical assault (grabbing someone and holding her against her while screaming insults in her face is assault)

“Against her will” is what I meant

Never saw the show, but his comments and if he did half of what as reported in the piece, he needed to be fired, should have been fired and put on a list of who not to hire. He showed no remorse making people uncomfortable and then brought up a nonsensical thought that if he did the same thing somewhere else it would be okay. No it would not have been.