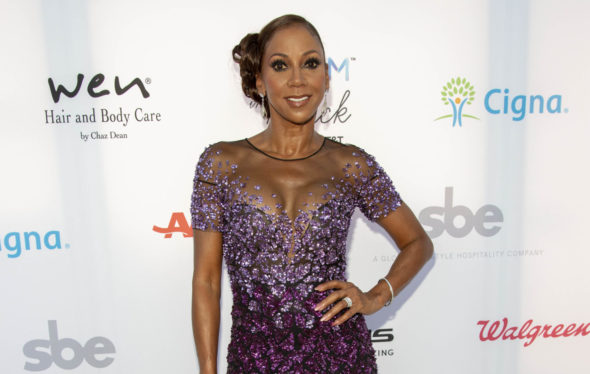 American Housewife kicked off its fifth season last week, and news of a new addition to the ABC sitcom has been announced. Actress Holly Robinson Peete is joining the series in a recurring role and will start filming this week.

Deadline revealed the following about Peete’s role on the ABC series:

“Peete will play Tami, a close friend of Katie’s (Katy Mixon) before the Ottos moved to Westport. Tami helped Katie quite a bit when Katie was a new mom — Katie always looked to Tami for advice, even considering her to be a bit “mom sensei.” When Tami’s two older children went off to college, she and her husband celebrated being empty-nesters. That celebration resulted in a now eight-year-old daughter. So when Tami moves to Westport with a youngster of her own, Katie is thrilled to reconnect with her old friend and hopes to return the favor and help her out.”

What do you think? Are you excited to see Holly Robinson Peete on American Housewife on ABC? Are you looking forward to the rest of season five?

Angela and Anna Kat were two of my favs. I’m not enjoying the new cast

I love the show but will have to wait until I see it, to rate the newcomer Holly.

I ABSOLUTELY LOVE THIS SHOW I WATCH IT ON HULU AND START OVER FROM SEASON 1 and watch it all the way through over and over again!!!! It puts me in a good mood and makes me laugh! I’m so excited for season 5 and I hope it continues on!!!!! And very excited to see Holly Robison Peete!!!

I can’t wait to learn what Holly Robinson Peete will be playing in the new season.

Great news. What an awesome addition to the show!