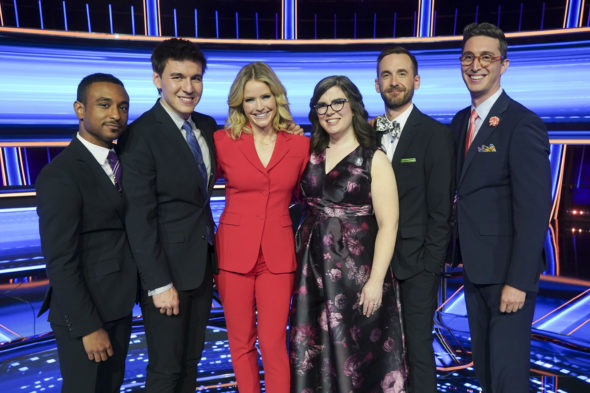 Can new Chasers make this series a big winner? Has The Chase TV show been cancelled or renewed for a fourth season on ABC? The television vulture is watching all the latest cancellation and renewal news, so this page is the place to track the status of The Chase, season four. Bookmark it, or subscribe for the latest updates. Remember, the television vulture is watching your shows. Are you?

Airing on the ABC television network, The Chase TV series is hosted by Sara Haines. The program is a fast-paced competition where three competitors must use their wits and knowledge to face off against the Chaser, a ruthless quiz genius who is determined to stop the contestants from winning cash prizes. In each episode, contestants are challenged to think faster than they ever thought possible, to answer up to 166 questions across all topics. Trivia masters Victoria Groce, Brandon Blackwell, Buzzy Cohen, Brad Rutter, and James Holzhauer each take turns serving as the Chaser.

The third season of The Chase averages a 0.31 rating in the 18-49 demographic and 2.21 million viewers in the live+same day ratings (includes all DVR playback through 3:00 AM). Compared to season two, that’s down by 36% in the demo and down by 39% in viewership. While these numbers don’t include further delayed or streaming viewing, they are a very good indicator of how a show is performing, especially when compared to others on the same channel. There can be other economic factors involved in a show’s fate, but the higher-rated series are usually renewed and the lower-rated ones are cancelled. Find out how The Chase stacks up against other ABC TV shows.

Will ABC cancel or renew The Chase for season four? The network cancelled several game shows earlier this year and renewed others. I think The Chase does well enough to be renewed. I’ll update this page with breaking developments. Subscribe for free alerts on The Chase cancellation or renewal news.

What do you think? Do you hope that The Chase TV show will be renewed for a fourth season? How would you feel if ABC cancelled this TV series, instead?

I like this game show , I even get some of the answers!!!