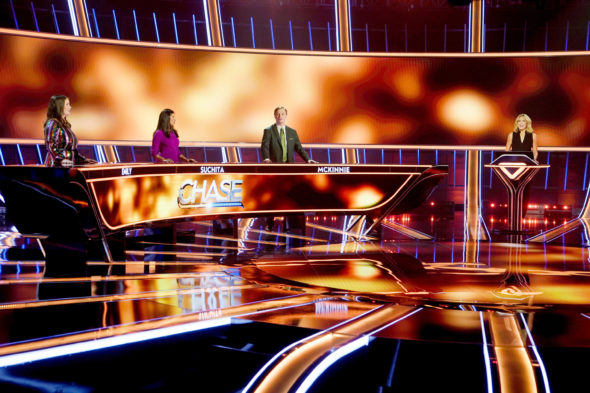 Which trivia master will be the most successful in the third season of The Chase TV show on ABC? As we all know, the Nielsen ratings typically play a big role in determining whether a series like The Chase is cancelled or renewed for season four. Unfortunately, most of us do not live in Nielsen households. Because many viewers feel frustrated when their viewing habits and opinions aren’t considered, we invite you to rate all of the third season episodes of The Chase here.

An ABC trivia quiz show, The Chase TV series is hosted by Sara Haines. The program is a fast-paced competition where three competitors must use their wits and knowledge to face off against the Chaser, a ruthless quiz genius who is determined to stop the contestants from winning cash prizes. In each episode, contestants are challenged to think faster than they ever thought possible, to answer up to 166 questions across all topics. Trivia masters Victoria Groce, Brandon Blackwell, Buzzy Cohen, Brad Rutter, and James Holzhauer each take turns serving as the Chaser.

What do you think? Which season three episodes of The Chase TV series do you rate as wonderful, terrible, or somewhere between? Do you think that The Chase should be cancelled or renewed for a fourth season on ABC? Don’t forget to vote, and share your thoughts, below.

I loved the face paced The Chase & no one but Sarah could have hosted it! Please bring it back!

Sara hands voice is like fingernails down a blackboard. We are to trust that the chaser knew the answers, as we do not get to see which one they selected!

Season 3 BORING, especially the Queen. Uff. If not for James and Brad, I wouldn’t watch. Bring back the Beast.

Season three got off to a really bad start. The first chaser, The Lightning bolt, is arrogant, Judgemental, Looks down on the contestants, not in a playful way, and is very annoying. Also, the addition of having to use the buzzers and the final chase, severely handicapped the contestants, making it impossible for them to win, no matter how bad the chaser is and in the first episode, he was quite bad.

Host on Chase is horrible. Repeats everything what’s going on numerous times like she’s teaching kindergarten