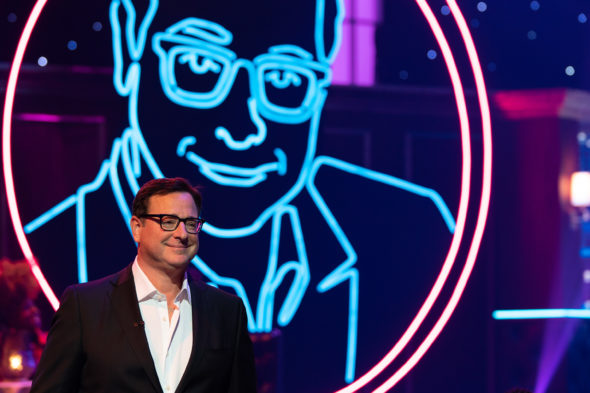 Can Bob Saget keep the lights on? Has the Videos After Dark TV show been cancelled or renewed for a second season on ABC? The television vulture is watching all the latest cancellation and renewal news, so this page is the place to track the status of Videos After Dark, season two. Bookmark it, or subscribe for the latest updates. Remember, the television vulture is watching your shows. Are you?

An ABC comedy reality series from creator Vin Di Bona, Videos After Dark is a spin-off of America’s Funniest Home Videos. Like the original, this program relies on viewer-supplied home videos of real mishaps, blunders, and bad decisions, but on the new series, they’re a bit more on the “edgy” side. Bob Saget has returned to the franchise to host the program and executive produces with Di Bona and Michele Nasraway.

Although it premiered with low numbers, it is still too soon to use the ratings to predict whether ABC will cancel or renew Videos After Dark for season two. Flying blind, I think it will snag a renewal. The format must be dirt-cheap to produce, in comparison to other TV series — even other reality TV series. Unless it tanks straight out of the gate, I think the network will give it time to catch on. Since that’s just speculation though, I’ll keep an eye on the ratings and update this page with breaking developments. Subscribe for free alerts on Videos After Dark cancellation or renewal news.

What do you think? Were you hoping that the Videos After Dark TV show would continue or be renewed for a second season on ABC?

I’m upset. I watched the two episodes and loved it. my opinion is to let renew! I work at Ritmo T-Mobile and when I would demo tablet during it’s promotions I would play that show on my hulu. Customers loved the clips it showed.