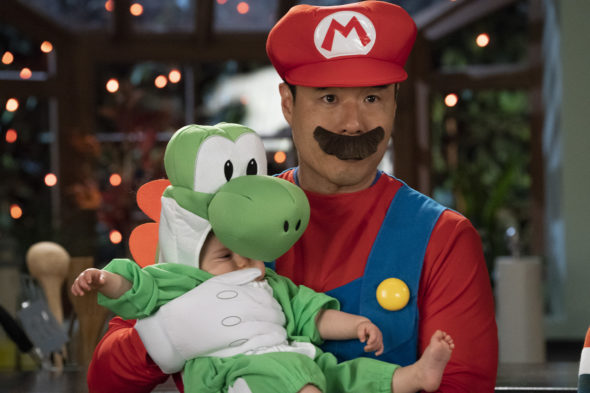 While the Huang family is off the boat, are they still on the map? Has the Fresh Off the Boat TV show been cancelled or renewed for a sixth season on ABC? The television vulture is watching all the latest cancellation and renewal news, so this page is the place place to track the status of Fresh Off the Boat, season six. Bookmark it, or subscribe for the latest updates. Remember, the television vulture is watching your shows. Are you?

An ABC family sitcom, Fresh Off the Boat stars Hudson Yang, Randall Park, Constance Wu, Forrest Wheeler, Ian Chen, Lucille Soong, Chesley Crisp, and Ray Wise. Set in the 1990s, the sitcom centers on Eddie Huang (Yang), his parents Louis and Jessica (Park and Wu), brothers Emery (Wheeler) and Evan (Chen), and grandmother Jenny (Soong). Now that they’ve been there for a few years, the Huangs have acclimated themselves to Orlando living. Season five kicks off with Louis as full owner of the steakhouse, Jessica, as an American citizen, and Honey and Marvin (Crisp and Wise) as new parents.

The fifth season of Fresh Off the Boat averaged a 0.61 rating in the 18-49 demographic and 3.03 million viewers. Compared to season four, that’s down by 40% and 21%, respectively. Find out how Fresh Off the Boat stacks up against other ABC TV shows.

Will ABC cancel or renew Fresh Off the Boat for season six? The ratings have taken a big hit with the move to Friday nights. That could be enough to kill the series but I suspect ABC would really like to have a sixth season, now that the series is in syndication. I’ll keep an eye on the ratings and update this page with breaking developments. Subscribe for free updates on any Fresh Off the Boat cancellation or renewal news.

5/10/19 update: ABC has renewed Fresh Off the Boat for a sixth season.

What do you think? Are you glad that the Fresh Off the Boat TV show has been renewed for a sixth season? How would you feel if ABC had cancelled this TV series, instead?

PLEASE RENEW IT!! I LOVE THIS SHOOOOOW!!!

I love this show! It’s so funny and one of the best shows on TV. I watch it on Hulu the day after. I hope ABC will consider renewing it for season 6.

Renew this show thanks. This and the bachelor is the only thing good on ABC so don’t ruin it. My boyfriend strongly agrees with my comment

I promptly quit watching this show during the episode where they thought making fun of fibromyalgia and suffers of the horrible disease was okay and comical. As a medical professional this is sad, distasteful and disgusting. As a fibromyalgia patient I was and still am furious, sad and embarrassed. We know enough to not make fun of cancer, multiple sclerosis, diabetes or any other illness/disease diagnosis so what small and simple minded writer or producer finds it acceptable to make fun of fibromyalgia?

what episode of fresh off the boat was that, the only show I know of that did what you were saying was speechless and I never gave that show the time of day