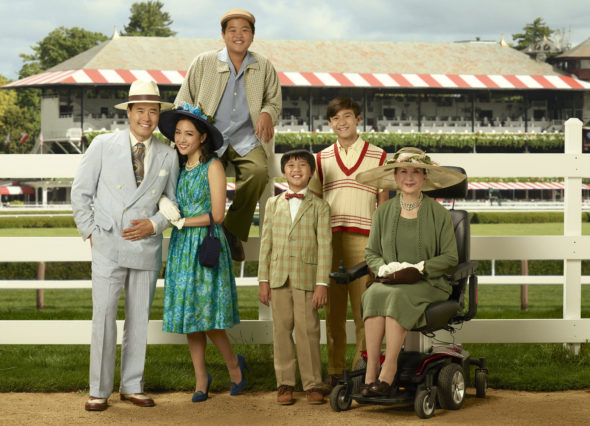 Is the Huang family still hanging tough on the Alphabet Network? Has the Fresh Off the Boat TV show been cancelled or renewed for a fifth season on ABC? The television vulture is watching all the latest cancellation and renewal news, so this page is the place place to track the status of Fresh Off the Boat, season five. Bookmark it, or subscribe for the latest updates. Remember, the television vulture is watching your shows. Are you?

A family sitcom airing on the ABC television network, Fresh Off the Boat stars Hudson Yang, Randall Park, Constance Wu, Forrest Wheeler, Ian Chen, Lucille Soong, Chesley Crisp, and Ray Wise. Set in the 1990s, the sitcom centers on Eddie Huang (Yang), his parents Louis and Jessica (Park and Wu), brothers Emery (Wheeler) and Evan (Chen), and grandmother Jenny (Soong). Now that they’ve been there for a few years, the Huangs have acclimated themselves to Orlando living. Still, they kick off the fourth season boarding with Honey (Crisp) and Marvin (Wise), as they continue to pursue the American Dream.

The fourth season of Fresh Off the Boat averaged a 1.02 rating in the 18-49 demographic and 3.83 million viewers. Compared to season three, that’s down by 13% in the demo and down by 3% in viewership. Find out how Fresh Off the Boat stacks up against other ABC TV shows.

By the end of this season, Fresh Off the Boat will have decent sized syndication package, which makes it easier to cancel. Then again, new sitcoms are difficult to launch and the ratings have been pretty consistent with last season’s. My gut feeling tells me that there’s a fifth season renewal in this show’s future. I’ll update this page with breaking developments. Subscribe for free updates on any Fresh Off the Boat cancellation or renewal news.


What do you think? Should the Fresh Off the Boat TV show have been renewed for a fifth season? How would you feel if ABC had cancelled this TV series, instead?

I’m SO HAPPY THERE WILL BE A SEASON FIVE!!!

We reported the renewal as well but somehow missed updating this page. Thanks for the note.

Please dont cancel the show its so good, funny, light, and heartwarming! We also need more Asian representation on the media!

I hope it hasn’t been cancelled! I especially like the Mandarin-speaking grandmother.

What kills me is that all the family shows have such a short-lived series. To only be replaced with shows that are just not all that.
More Family shows that make our funny bone go aha, hahahahaaa! slap knee Happy! instead of Politically Correct Statements.

I will be upset

Please keep Fresh off the boat… love it!!!!

Yeah, I love that show it was great. idk why they would end it