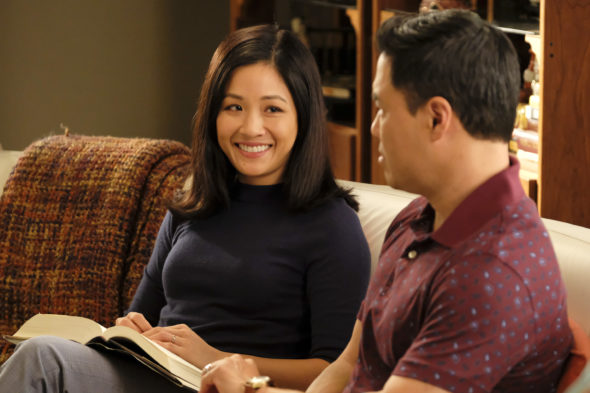 Can the ratings sink any lower? Has the Fresh Off the Boat TV show been cancelled or renewed for a seventh season on ABC? The television vulture is watching all the latest cancellation and renewal news, so this page is the place to track the status of Fresh Off the Boat, season seven. Bookmark it, or subscribe for the latest updates. Remember, the television vulture is watching your shows. Are you?

Airing on the ABC television network, Fresh Off the Boat stars Randall Park, Constance Wu, Hudson Yang, Forrest Wheeler, Ian Chen, Lucille Soong, Chelsey Crisp, and Ray Wise. Set in the 1990s, the sitcom centers on teenager Eddie Huang (Yang), his parents Louis and Jessica (Park and Wu), brothers Emery (Wheeler) and Evan (Chen), and grandmother Jenny (Soong). The family moved from Chinatown in Washington DC to Orlando, Florida to open a cowboy-themed restaurant and pursue the American Dream. The Huang family assimilates into suburban life, in part thanks to the help of their neighbors Honey (Crisp) and Marvin Ellis (Wise).

The sixth season of Fresh Off the Boat is averaging a 0.44 rating in the 18-49 demographic and 2.37 million viewers. Compared to season five, that’s down by 28% and 22%, respectively. Find out how Fresh Off the Boat stacks up against other ABC TV shows.

Will ABC cancel or renew Fresh Off the Boat for season seven? The ratings are low, even for a Friday night show. However, the series has already been sold into syndication so that likely makes a lot of money for Disney. I suspect it will be renewed, unless the main cast members don’t want to continue. I’ll keep an eye on the ratings and update this page with breaking developments. Subscribe for free alerts on Fresh Off the Boat cancellation or renewal news.

11/8/19 update: ABC has announced that Fresh Off the Boat is ending with season six so, there won’t be a seventh year.

What do you think? Were you hoping that the Fresh Off the Boat TV show would be renewed for a seventh season? Are you sorry that this ABC TV series is ending, instead?

It was my favorite show

We barely made it through the first episode so I can’t believe this is still on. But that’s ABC for you. They cancel what the viewers want and keep this stuff going for years.

I have watched all six seasons and found it was absolutely the best sitcom I have ever watched.