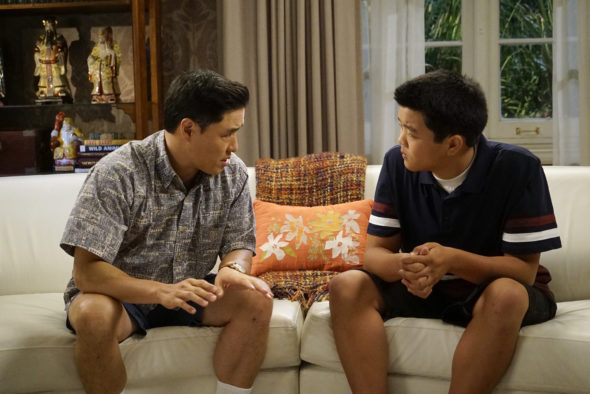 Is the American Dream still alive for the Huang family in the sixth season of the Fresh Off the Boat TV show on ABC? As we all know, the Nielsen ratings typically play a big role in determining whether a TV show like Fresh Off the Boat is cancelled or renewed for season seven. Unfortunately, most of us do not live in Nielsen households. Because many viewers feel frustration when their viewing habits and opinions aren’t considered, we invite you to rate all of the sixth season episodes of Fresh Off the Boat here. *Status update below.

An ABC family comedy, Fresh Off the Boat stars Randall Park, Constance Wu, Hudson Yang, Forrest Wheeler, Ian Chen, Lucille Soong, Chelsey Crisp, and Ray Wise. Set in the 1990s, the sitcom centers on teenager Eddie Huang (Yang), his parents Louis and Jessica (Park and Wu), brothers Emery (Wheeler) and Evan (Chen), and grandmother Jenny (Soong). The family moved from Chinatown in Washington DC to Orlando, Florida to open a cowboy-themed restaurant and pursue the American Dream. The Huang family assimilates into suburban life, in part thanks to the help of their neighbors Honey (Crisp) and Marvin Ellis (Wise).

What do you think? Which season six episodes of the Fresh Off the Boat TV series do you rate as wonderful, terrible, or somewhere between? Do you think that Fresh Off the Boat on ABC should be cancelled or renewed for a seventh season? Don’t forget to vote, and share your thoughts, below.

*11/8/19 update: ABC has announced that Fresh Off the Boat is ending with season six so, there won’t be a seventh year.