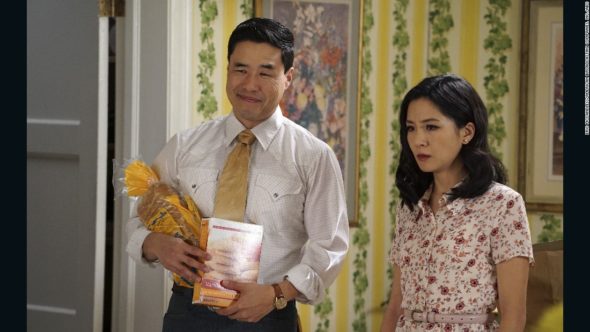 Is there still drama behind the scenes of Fresh Off the Boat? Recently, star Randall Park spoke with Variety about Constance Wu’s controversial reaction to the ABC TV show’s season six renewal.

Recently, Constance Wu sparked some controversy after reacting poorly to the news that ABC renewed Fresh Off the Boat for a sixth season. When asked about the reaction, Park revealed the cast was actually not expecting the renewal:

What do you think? Do you watch Fresh Off the Boat? Will you watch season six?

Will definately be watching season 6, i really missed the show. i like all the actors, they all play the parts very well. Can’t wait to see more of marvin and honey, plus what eddie is doing. Plus of course the grandmother, she is really funny.

I don’t watch much anymore, getting old . I don’t like the wife .

This is great news. It’s a good show. Having a steady job in entertainment is not an easy accomplishment. So the stars that had already planned to move on…will happily deal with it. As for those who aren’t accustomed to watching another side of life (an Asian American family) please step out of the box and enjoy!

Cannot believe Fresh off the boat was renewed!! Should have renewed “The Kids are Alright”! But you keep renewing stupid shows like the Bachelorette, or air boring basketball & booger up Sunday evening show time!!

I was surprised by the renewal. I’ve watched the show since the beginning but was ready for it to end. It seems like the show has run its course.

Really happy to hear there is a season 6 coming up. We enjoy this show very much.

Have to say I didn’t like The kids are alright,but that’s just me i guess. 🙂 But we sure do MISS the COOL KIDS. BRING that back for us older folks.

It would be very hard to care any less about this than I already do. Bring back The Kids Are Alright: they were fighting to keep their jobs!

I totally agree! Bring back THE KIDS ARE ALRIGHT & get rid of this idiotic show Fresh off the boat. It’s not funny at all… & they keep awful shows like this one year after year. And bring back THE COOL KIDS, too!