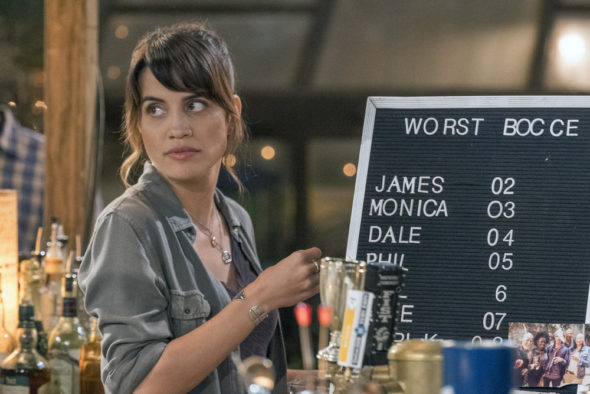 It there time for another round? Has the Abby’s TV show been cancelled or renewed for a second season on NBC? The television vulture is watching all the latest cancellation and renewal news, so this page is the place to track the status of Abby’s season two. Bookmark it, or subscribe for the latest updates. Remember, the television vulture is watching your shows. Are you?

An NBC sitcom from creator Josh Malmuth, who executive produces with Michael Schur, Abby’s stars Natalie Morales, Nelson Franklin, Neil Flynn, Jessica Chaffin, Kimia Behpoornia, and Leonard Ouzts. In one way, it’s the first of its kind — a multi-cam comedy, filmed outside, in front of a live audience. The story unfolds at Abby’s, an illicit neighborhood bar, run by a former Marine Staff Sergeant, out of her (rented) backyard. Abby (Morales) runs a tight ship, but her regulars including Beth (Chaffin), Fred (Flynn), Rosie (Behpoornnia), and James (Ouzts) like it that way. Everything is smooth sailing until her landlady dies and leaves the property to her uptight newly divorced nephew, Bill (Franklin). Now Bill and Abby have to come to a meeting of the minds, but Bill’s inclined to make things work, because the place is already starting to feel like home — only less lonely.

The first season of Abby’s is averaging a 0.39 rating in the 18-49 demographic and 1.64 million viewers. Find out how Abby’s stacks up against other NBC TV shows.

Will NBC cancel or renew Abby’s for season two? The ratings have been very low, right from the start, so I think it will be cancelled. I’ll keep a hungry eye on the ratings and update this page with breaking developments. Subscribe for Abby’s cancellation or renewal alerts.

5/30/19 update: NBC has cancelled the Abby’s TV show so there won’t be a second season.

What do you think? Were you hoping that the Abby’s TV show would be renewed for a second season? Are you sorry that NBC cancelled this TV series, instead?

I love this show and I love the characters. Please renew this show.

I love this show- I know it’s cheesy & a bit lame, but it really is a good, positive half hour, intimate setting, unique type show! It deserves at LEAST a season 2. Come on NBC!!