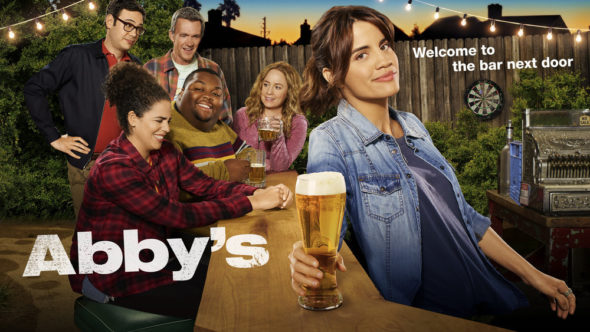 TV show description:
From creator Josh Malmuth, who executive produces with Michael Schur, the Abby’s TV show is the first of its kind — a multi-camera sitcom, filmed outside, in front of a live audience. The comedy centers on Abby’s, an illicit backyard neighborhood bar.

A bi-sexual former U.S. Marines Staff Sergeant, who served two tours in Afghanistan, when Abby (Morales) returned home she waitressed for a while, but couldn’t stand people telling her what to do. When she first moved into her new place, Abby found neighbor Beth (Chaffin) drinking cheap boxed wine in the backyard, in order to escape her family. Not long after that, the bar was born.

Abby runs a strict joint. Customers are assigned seating areas, based on how well she knows them, and whether or not they get on her nerves. People have to prove themselves, before they get a seat at the bar itself. And they’d better adhere to her 162 rules and regulations, the second of which is that no one enters her house. Rule number one is no visors, and regulars know that if a customer dares breaks out a cellphone, Abby will drop kick it into the next yard.

Everything is just fine and dandy at Abby’s until her elderly landlady, Alice, dies. Since Alice left the house to her nephew Bill (Franklin), he stops by to introduce himself to his new tenant, only to be alarmed by the fact that she’s running an illegal, outdoor tavern on his property.

A newly divorced engineer, and something of a sad-sack, uptight Bill is downright alarmed that Abby’s peddling booze in the backyard and wants to shut the place down. After the regulars make him feel at home, he relents and decides he’ll allow Abby’s to remain open, if she’ll agree to get a liquor license and some insurance, and get rid of the grill.

Abby refuses and decides to shut the place down, but her regulars convince her to meet Bill halfway. In addition to Beth, they include Fred (Flynn), who used to work with Abby’s alcoholic dad, and has known her since she was a little girl; Rosie (Behpoornnia), the self-appointed bar manager who has memorized all the rules; and timid, conflict-avoidant James (Ouzts), who is supposed to act as Abby’s bouncer.

Now that Bill’s at least partially on board, it doesn’t take long for him to see there’s something special about Abby’s. Drinking there is a privilege, and once you’re truly accepted, you’re one of the family.

Series Finale:
Episode #10 — The Fish
When Bill admits to the group that he has Padres season tickets behind home plate that he lost in his divorce, the gang forces him to invite his ex-wife to the bar to reclaim the tickets.
First aired: June 13, 2019

What do you think? Do you like the Abby’s TV series? Should this NBC TV show have been cancelled or renewed for a second season?

We love the show Abby

Abby’s was one of the best shows I had seen in a long time. Put it on so late many working people can’t watch it and wonder why you got poor ratings. Rare I watch much television any more and cancellation of this show, even less now.