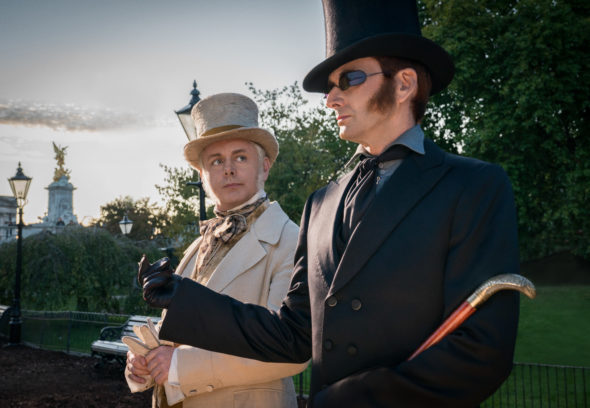 TV show description:
The Good Omens TV show is based on the 1990 fantasy novel Good Omens: The Nice and Accurate Prophecies of Agnes Nutter, Witch, by Terry Pratchett and Neil Gaiman. Gaiman created the TV series after receiving a letter from Pratchett (who would die of Alzheimer’s Disease), in which he encouraged his co-author to finish their long discussed adaptation.

Narrated by God (McDormand), the story kicks off with the fall of man, then jumps to the 2007 birth of the Antichrist and two other infants who with whom he was confused, due to an unintentional game of Three-card Monte, at an English convent run by satanic nuns.

In 2018, 11 years after the birth and baby switch, the angel Aziraphale (Sheen) and the demon Crowley (Tennant) need to locate the misplaced boy who is supposed to usher in the apocalypse. It seems they have both grown rather fond of Earth and want to thwart its impending doom.

In 2007, acting on orders from his infernal master, Crowley was to swap the infant son of Satan (Cumberbatch) with the newborn son of the workaholic U.S. Ambassador to UK, Thaddeus Dowling (Offerman) and his neglected wife Harriet (Winternitz). Meanwhile, the angel Gabriel (Hamm) appeared to Aziraphale to more or less inform him it was the beginning of the end.

On the night the Dowling boy entered the world, an English couple — Deirdre (Brooke) and Arthur Young (Mays) — realized their impending bundle of joy was arriving sooner than expected. Thanks to Crowley’s displeasure at carrying out this assignment and a comedy of errors at the convent, the Antichrist was given to the Youngs, who named him Adam, while their son went to the Dowlings. Harriet named the Youngs’ boy Warlock at the nuns’ suggestion. Meanwhile, the fate of the Dowlings’ biological son was unclear.

Crowley, who had developed a deep devotion to creature comforts, reached out to Aziraphale, whom he had met when (the original) Adam and Eve were expelled from Eden. He proposed that they both try to influence the presumed Antichrist away from Armageddon.

Despite being a well-meaning angel, Aziraphale had not exactly lived an ascetic life and was ripe and ready to agree to Crowley’s plot to stave off the final battle between Heaven and Hell. When Warlock (Rocco Day) was five years old, Crowley disguised himself as a nanny and Aziraphale posed as a gardener, in order to insert themselves into the child’s life.

Through the years, both Crowley and Aziraphale gave updates on the boy to their respective home offices. Both neglected to mention their alliance or other plans.

On his 11th birthday, Warlock (Marraccino) is supposed to come into full power upon receiving his own hellhound and giving it a name. This event should then kick off the world ending battle between good and evil. According to Crowley, if he and Aziraphale have done their job, Warlock will send the hound away unnamed and the apocalypse will be averted.

In 2018, Crowley tries to convince Aziraphale to kill the child before the dog arrives, but the angel doesn’t have the stomach for it, and wonders if he might stop the mutt, instead. This is all for naught, since the dog never shows at Warlock’s party, because Warlock Dowling, after all, is just the mundane biological son of Deirdre and Arthur Young. Meanwhile, the boy the Youngs and the world know as Adam (Buck) is, in fact, the Adversary.

As he’s playing in the woods with his friends, under the hidden hellhound’s watchful glare, Adam tells his companions he is hoping to get a dog for his birthday. Because he is the devil’s unsuspecting offspring, Adam wishes for a regular, little dog.

A hellhound’s name should be terrifying and embody its true nature — give it its purpose and function. While Crowley imagined Warlock would name it something like Throat-Ripper, Adam names his wished-for canine companion Dog. The lurking, vicious hellhound transforms into a sweet looking furry friend and presents himself to the birthday boy.

When the hellhound fails to show at the Dowlings, Crowley and Aziraphale realize they’ve spent six years influencing the wrong boy and that the true Antichrist must have been swapped for another baby. Crowley senses that the hellhound has found its master, who has named it and come into his power.

With the four horsemen of the apocalypse approaching, Crowley and Aziraphale brace for what’s to come, which was accurately predicted by the 17th century witch, Agnes Nutter (Lawrence), in her book The Nice and Accurate Prophecies of Agnes Nutter, Witch. Meanwhile, the descendants of Nutter and her persecutors have a role to play in the coming events.


What do you think? Do you like the Good Omens TV series? Should this Amazon TV show be cancelled or renewed for another season?

I feel EXACTLY as Angela Russell does! I hope the show continues, please!!

At last. an entertaining series for any age group, gender identity, political affiliation, religious belief (not 100% sure on that one) and any other groups with conflicting views, that sends a positive message to humanity to love one another and work together for the greater good.

I could not believe how genius this show was. I was so sad when it ended. I miss Aziraphale and Crowley everyday. I have to watch reruns of the shows when I miss the show too much. PLEASE make more. I think that if there really were an angel and demon that had been around since the dawn of time and had formed a bond because of the stresses of their job then they would be exactly like these two are. Their playful wittiness born from eons of hard-earned wisdom combined with their deep-seeded good natures makes it believable that… Read more »

I hope this series continues. Just finished watching and loved it!!!! So different, fun and very entertaining and bring on Season 2!!!!

We all hope the series continues. The whole family enjoyed season one.

Please run a second season of Good Omen’s. Our family enjoyed the first season very much and would like to see it continue.