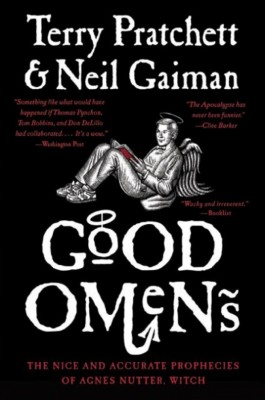 Good things are in store for fans of Good Omens. The Guardian reports that Neil Gaiman is adapting the book for a limited TV series.

The book, co-written by Gaiman and the late Terry Pratchett, was published in 1990.

Good Omens takes place as the Apocalypse is nearing. The story follows an angel, Aziraphale, and a demon, Crowley, as they try and prevent the the End Times because they’ve grown accustomed to the comfort of Earth.

The book was adapted for the radio in 2014, featuring the voices of Mark Heap and Peter Serafinowicz. In 2011, it was reported that Monty Python member Terry Jones and Gavin Scott would be producing a TV series based on the novel, but plans were later scrapped.

Apparently, Gaiman announced this week he would be personally adapting the book after reading a letter from the Pratchett, who died in 2015.

A release date has yet to be announced.

What do you think? Have you read Good Omens? Are you excited about the TV series? Will you watch?