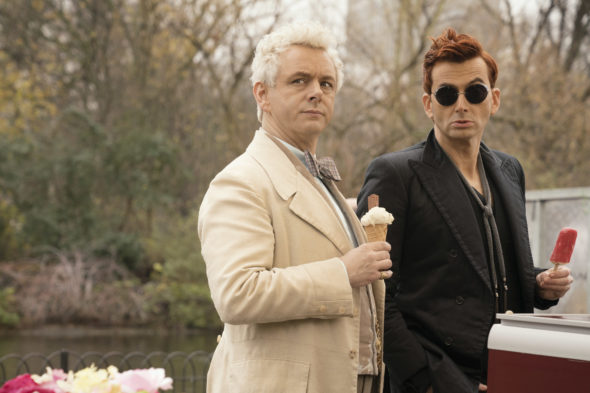 The boys are back! Good Omens stars David Tennant and Michael Sheen recently reunited for a special audio episode of the Amazon TV show.

Based on the novel by Terry Pratchett and Neil Gaiman, the series stars Michael Sheen and David Tennant as an angel (Aziraphale) and a demon (Crowley) who must team up to save the world. The Prime Videoseries also stars Jon Hamm, Sam Taylor Black, and Nick Offerman.

Tennant and Sheen teamed up again as their Good Omens characters for a special “Lockdown” episode to commemorate the novel’s 30th anniversary. Gaiman wrote the special, which you can watch below:

What do you think? Are you a fan of Good Omens? Would you watch another season?

Please give us more episodes!! What a fantastic show I love the relationship between the 2 angel and demon and its put together so well. Great acting on all fronts how could you renew!

Maybe it’s just me but I am so tired of all the ‘from home’ shows that lack any enjoyment and smack of celebrities narcissism coming to the fore.

Right now I want to watch TV to be entertained and to take my mind away from the crisis,not continually be reminded of it because somebody can’t stand be out of the public eye for a few months.

Brillant. Just wacky enough to enjoy thoroughly.
I very much Hope there is another Season?

I would love to see a new season return. Michael Sheen and David Tennant were brilliant….

Oh what I would give for a second season! The audio episode was so good and so adorable! Now I need to go watch the series again. Oh what hardship that is…lol!

I definitely would love to watch a second season, only if it was as cheeky and amazing like the 1st season shows.

I would love to see this series return. I was really disappointed when the final episode ended. What a great warped humor series. I enjoyed every episode