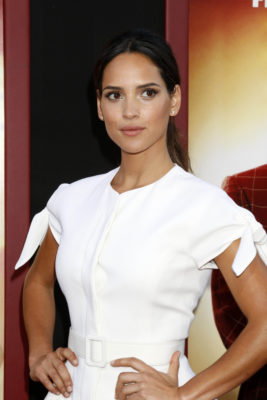 Good Omens has some new company. Recently, Amazon announced Adria Arjona and other have joined the upcoming TV show.

In addition to Arjona, Good Omens will star Jack Whitehall, Michael McKean and Miranda Richardson. The series is slated to premiere on Prime Video in 2019.

September 15, 2017– Jack Whitehall (Fresh Meat, Bad Education), Michael McKean (Better Call Saul, This is Spinal Tap) and Miranda Richardson (Harry Potter, Churchill, Stronger) have been confirmed in the cast for Good Omens – the forthcoming six-part television adaptation for Amazon Prime Video of the acclaimed novel by Terry Pratchett and Neil Gaiman. Equal parts humour and horror, fantasy and drama, the series is written by Neil Gaiman (American Gods), who will also serve as Showrunner. It will launch in the UK on Prime Video before going on to BBC Two at a later date.

Whitehall will be playing Newton Pulsifer aka Newt – an unfulfilled wages clerk turned witch-hunter – and McKean will take on the role of Sergeant Shadwell, the leader of the witch-finder army who sends him on his mission. Miranda Richardson will play Madame Tracy, the psychic medium and part-time courtesan who provides a helping hand to the pair as they try to save the world from Armageddon.

Commenting on his casting as Newt, Whitehall says: “I feel extraordinarily privileged to have been asked to play this part and cannot wait to get started.”

Michael McKean adds: “I’m thrilled to join this amazing cast and creative team. I can’t think of anyone I’d rather enjoy Armageddon with than Gaiman, Pratchett, Mackinnon and company”

Good Omens was commissioned for Amazon Prime Video and for BBC Two by Patrick Holland, Controller, BBC Two; Shane Allen, Controller, BBC Comedy Commissioning and BBC commissioning editor Gregor Sharp. It is being produced by the comedy team at BBC Studios, the BBC’s commercial production arm, Narrativia and The Blank Corporation, in association with BBC Worldwide.

Good Omens will launch globally on Prime Video by Amazon Studios by Amazon Studios in over 200 countries and territories in 2019 including in the UK, where it will also air on BBC Two at a later date. BBC Worldwide distributes rights for Good Omens internationally, after the series premiere on Prime Video. The series will be brought to the screen by the highly acclaimed director Douglas Mackinnon, whose credits include Doctor Who, Outlander and the standalone Victorian episode of Sherlock: The Abominable Bride, winner of the Primetime Emmy Award for Outstanding Television Movie last year.”

What do you think? Have you read Good Omens? Will you watch the TV show?