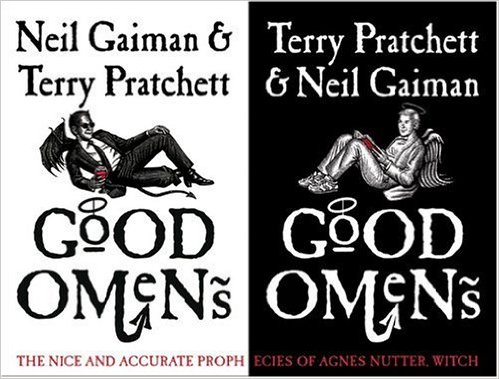 Amazon has both good and evil. Recently, the streaming service released a first look a their upcoming TV show Good Omens.

The newly released image shows Michael Sheen as the angel Aziraphale and David Tennant as the demon Crowley. Good Omens is slated to premiere on Prime Video in 2019. 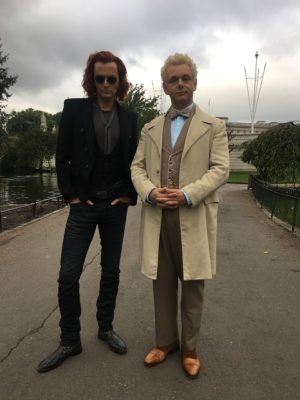 Based on the acclaimed novel by Terry Pratchett and Neil Gaiman Good Omens will be filming for the next six months in London, Oxfordshire and locations in South Africa. Equal parts humour and horror, fantasy and drama, it is written by Neil Gaiman (American Gods) who is serving as Showrunner and will launch in the UK in 2019 on Prime Video before going on to BBC Two at a later date.

Commenting on the start of production, Gaiman says: “People have fallen in love with an angel and a demon in a book by Terry Pratchett and me, and they have been excited and nervous to see how they would appear on screen – and I was probably the most nervous and excited of all. This is a first look. Michael Sheen is the best and finest of bookseller angels, David Tennant the coolest and most delightful of demons. Together they are one hell of a double act (or do I mean one made in Heaven?)”

Good Omens was commissioned for Amazon Prime Video by Amazon Studios and for BBC Two by Patrick Holland, Controller, BBC Two; Shane Allen, Controller, BBC Comedy Commissioning and BBC commissioning editor Gregor Sharp. It is being produced by the comedy team at BBC Studios, the BBC’s commercial production arm, Narrativia and The Blank Corporation, in association with BBC Worldwide.

Good Omens will launch globally on Prime Video in over 200 countries and territories in 2019 including in the UK, where it will also air on BBC Two at a later date. BBC Worldwide distributes rights for Good Omens internationally, after the series premiere on Prime Video. The series will be brought to the screen by the highly acclaimed director/executive producer Douglas Mackinnon, whose credits include Knightfall, Dirk Gently, Doctor Who, Outlander and the standalone Victorian episode of Sherlock: The Abominable Bride, winner of the Primetime Emmy Award for Outstanding Television Movie last year.”

What do you think? Have you read Good Omens? Will you watch the Amazon TV series?