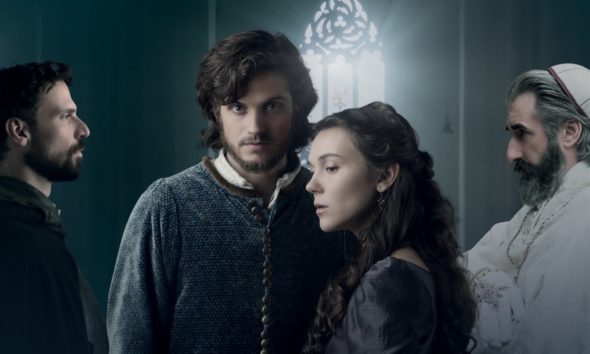 How will Medici end? Recently, executive producer Frank Spotnitz spoke with TVInsider about the third and final season of the Netflix TV show.

The third and final season of Medici was released on Netflix today, May 1st. So what’s in store? EP Frank Spotnitz revealed the writing team knew season three would be the last and planned accordingly:

We absolutely knew. I mean, we could still do more Medici. There are more great Medici figures, most notably Catherine de’ Medici, but we knew this would be the end of Lorenzo’s saga, for sure.”

Later, Spotnitz revealed he thinks the final season is the most “emotional”:

And it turned out the lack of plot was a blessing because instead, we dug into the characters and his family and in the meaning of his life. And, for me, it’s the most emotional and powerful season of all because it is less plot-oriented.

In Season 2, Lorenzo was this idealist who wants to do good to be good, and that’s ended disastrously with his brother’s blood literally on his hands and he feels responsible. So, he’s a greatly changed man this season and kind of determined to take things into his own hands, and so he kind of turns against God, which is a big deal in the 15th century. He decides he’s going to remake the world the way he sees fit and do whatever it takes to accomplish that. So, I think it’s really, really powerful, the journey he’s on this year.”

What do you think? Are you a fan of Medici? Will you watch the final season?

yes I am a fan of Medici and will continue watching it until the end which I wish were not here but through Catherine. Plus based shows are of course magnificent there is also something wonderful about seeing a character being developed. So imbalance of the two is most important in my mind for a successful series