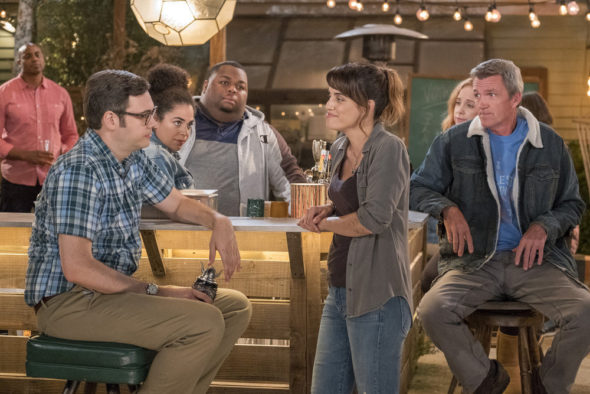 How soon would you invoke “last call” during the first season of the Abby’s TV show on NBC? As we all know, the Nielsen ratings typically play a big role in determining whether a TV show like Abby’s is cancelled or renewed for season two. Unfortunately, most of us do not live in Nielsen households. Because many viewers feel frustration when their viewing habits and opinions aren’t considered, we’d like to offer you the chance to rate all of the Abby’s season one episodes here. *Status update below.

An NBC sitcom from creator Josh Malmuth, who executive produces with Michael Schur, Abby’s stars Natalie Morales, Nelson Franklin, Neil Flynn, Jessica Chaffin, Kimia Behpoornia, and Leonard Ouzts. In one way, it’s the first of its kind — a multi-cam comedy, filmed outside, in front of a live audience. The story unfolds at Abby’s, an illicit neighborhood bar, run by a former Marine Staff Sergeant, out of her (rented) backyard. Abby (Morales) runs a tight ship, but her regulars including Beth (Chaffin), Fred (Flynn), Rosie (Behpoornnia), and James (Ouzts) like it that way. Everything is smooth sailing until her landlady dies and leaves the property to her uptight newly divorced nephew, Bill (Franklin). Now Bill and Abby have to come to a meeting of the minds, but Bill’s inclined to make things work, because the place is already starting to feel like home — only less lonely.

What do you think? Which season one episodes of the Abby’s TV series do you rate as wonderful, terrible, or somewhere between? Should NBC cancel or renew Abby’s for a second season? Don’t forget to vote, and share your thoughts, below.

The show had potential. It took us a few episodes to get to know and like the characters. It took me a WHOLE first season to like “The Office” and you see how long that stayed on the air. Too bad Abby’s Place wasn’t given another season to build their viewers.

Please do not cancel Abby’s it’s a great show

I love this show! I thought it was really funny! I love James the bouncer and Bill the landlord. He makes the show. He’s freaking hilarious! I’m very disappointed that it’s been cancelled!

The one where James is offered the promotion

Sorry gave the show several tries. Not funny .Ended looking for another show to watch in the middle of the last show.

Has potential to be that show opposite Last Man Standing. The character background is good and its got a solid foundation. Keep the scrubs guy, landlord, Abby and ditch the staff writers ( the one liners suck!). I hope to see a second season.

As it says above: “Votes are weighted so that both the number of votes cast and the individual star ratings contribute to the average score.”

Seems to me, like most neighborhoods, someone is going to complain about what shes doing. Kind of a stupid idea. We will see what happens when someone gets alittle too drunk !!!