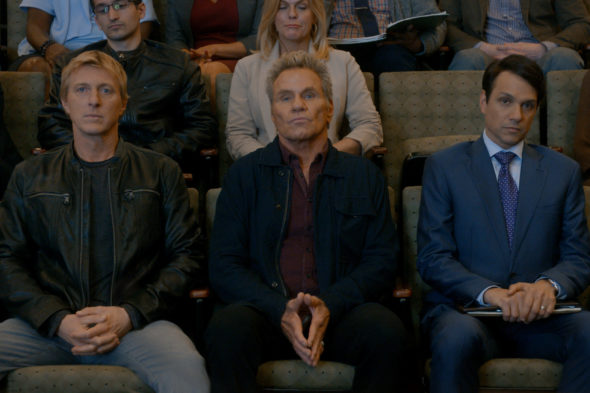 Cobra Kai is returning with new episodes on Friday, and Netflix is getting viewers ready for season three with a sneak peek and a recap video showing off what happened during the first two seasons. Those seasons aired on YouTube Red, which cancelled the series once the streaming service exited the original programming game.

The cast of Cobra Kai includes Ralph Macchio, William Zabka, Courtney Henggeler, Xolo Maridueña, Tanner Buchanan, Mary Mouser, Jacob Bertrand, Gianni Decenzo, and Martin Kove. The Netflix drama is a continuation of the Karate Kid films featuring Daniel LaRusso (Macchio) dealing with life as a business owner and at home with his family when his old foe from his teens (Zabka) returns to his life.

Season two ended with Miguel in a coma after an accident during a fight with Robby Keene. Miguel will have a long road of recovery ahead of him. Jon Hurwitz, co-showrunner of the series, spoke about what is to come on season three with TV Line. He said the following:

“He needs to physically rehabilitate to hopefully be able to walk again, much less fight again. In Season 2, he was on a path and being taught by a reformed Johnny to still have the toughness of Cobra Kai, but to sometimes show mercy. I think we all, as an audience, were rooting for him to show mercy in that moment, but sometimes you do the right thing and it doesn’t work out for you. He needs to reevaluate what his relationship with Johnny is. He’s had this sensei who he listened to and who believed in him. When you’re lying in a hospital bed, unable to move your feet, you question your choices, you question your mentor. In Season 3, the audience is going to watch Miguel go through all of the struggles, and we’ll see how he deals with the aftermath.”

Cobra Kai returns on January 1. Check out the cast recap and sneak peek of season three below.

What do you think? Are you excited for the return of the Cobra Kai TV show? Will you be watching season three on Netflix?