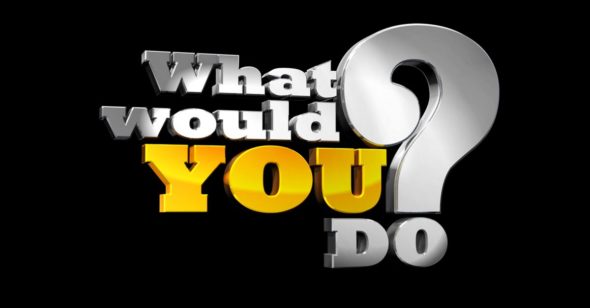 Is the What Would You Do? TV show still making you think? Would you recommend people watch the 15th season of this ABC hidden camera series? As we all know, the Nielsen ratings typically play a crucial role in determining whether a TV show like What Would You Do? is cancelled or renewed for a 16th season. Unfortunately, most homes aren’t Nielsen households, and many viewers get upset that their viewing and opinions aren’t counted. We’d like to offer you a chance to rate the season 15 episodes of What Would You Do? here. Status Update Below.

Hosted by John Quiñones, What Would You Do? explores how people react to strangers in uncomfortable circumstances. With hidden cameras at the ready, actors play out various scenarios, in front of unwitting bystanders. The ABC TV series seeks to discover how and when people feel they must intervene and when and why they choose to mind their own business. Quiñones reports about how they made their decisions.

What do you think? Which season 15 episodes of What Would You Do? do you rate as wonderful, terrible, or somewhere between? Should ABC cancel or renew What Would You Do? for season 16? Don’t forget to vote, then share your thoughts, below.

What would you do, is entertaining, educational gets you thinking, great show with no vulgarity….

Please don’t cancel the show, my family find it one of the most entertaining and eye opening shows on and it’s REAL.

I love what would you do

I love the show What Would You Do.