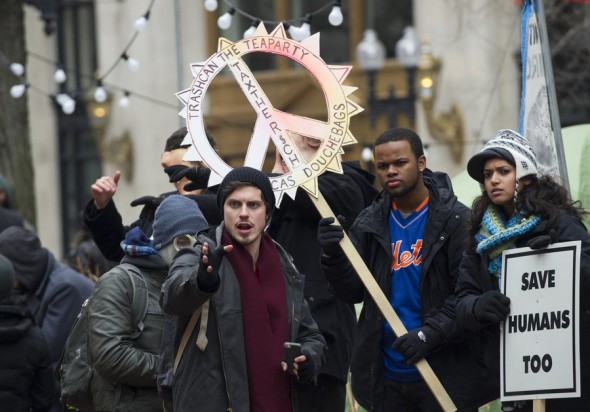 It’s pretty rare that a TV show that’s launched very late in the season becomes a success in the ratings. Could American Odyssey on NBC be an exception? Will it be cancelled or renewed for a second season instead?

The ratings for American Odyssey then plunged again in week three, falling to a 0.52 rating with 3.11 million. Last week’s episode held pretty steady in the demo but dropped another 10% in viewership.

Unless the numbers take a stunning change of course quickly, there’s little question that NBC will cancel this TV show. The ratings are just too terrible to justify a second season.

At this point, the real question is if the network will pull American Odyssey from the schedule before all of the remaining eight episodes have aired. They could go either way.

NBC cancelled and pulled low-rated Allegiance from the Thursday night schedule after five episodes but released the eight unaired installments online. Conversely, they let the remaining episodes of The Slap mini-series air. We’ll have to wait and see what they do.

But, what do you think? Do you like the American Odyssey TV show? Why is it performing so poorly? If you ran the network, would you cancel or renew this series for a second season?

I am definitely a fan of American Odyssey! There are so many ways the story can be continued & I’m very hopeful it will be!

I do hope they bring the show back. I really got into it. I think it is a sleeper. Bring it back and I am sure viewership will go up.

NBC really leaves we viewers with GREAT DISAPPOINTMENT. They gave us Season one of American Odyssey, (which was most awesome), then at the end of Season one, to leave us all hanging out there with many unresolved events, they decided to not do a Season two, without any explanation. NBC………you owe we as viewers a reason WHY ?? Also get your act together and complete the series. There is too much distrust and many misleading things going on in our country right now. Don’t add to it by pulling ‘this on’ us. Get busy on a Season Two !!

Very well put and we’ll see if everyone taking time to make comments to NBC makes any difference………..or if it’s provided to patronize us. We get too much of the now-days and our voices fall on deaf ears !

I enjoyed this TV series and was very unhappy that it was being cancelled. Enjoyed the writing and acting. I was so looking forward to the series coming back. There is so much junk on American TV I read mostly.

I loved American odyssey. Hope it comes back for season 2.

We LOVE this very exciting show. Please bring it back. The development of the story line is intriguing and has been exceptionally exciting.

I really hope they bring the show back. I watched all episodes in three days. It is so exciting. One of the best shows on. Love it!

I watched the series on Netflix and thought it was excellent

great movie. It should be continue with the season 2

I absolutely loved this Show! I could not stop watching it until I watched it all the way through! They need to make a second season!

I think the Network was pressured by some element of the White House to stop the show. American Odyssey was just too close to the truth about what is really happening in the real world. We live in a country where our privacy is violated and our government keeps us ignorant about the truth. TV programs of this nature have no chance of staying on the air and I don’t believe the ratings the network claimed, why should I. American Odyssey is an interesting story and it probably only appealed to the few military people such as me since we… Read more »