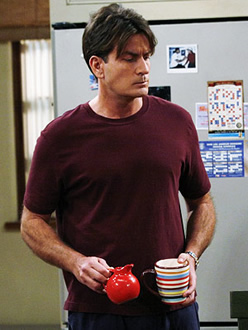 Though Two and a Half Men is one of CBS’ highest-rated shows and in the midst of a two-year order, Charlie Sheen’s contract renewal has, for some reason, come down to the wire. It’s pretty clear that, without Sheen, there won’t be a TV show.

Well, TMZ is reporting that, contrary to popular belief, there aren’t any ongoing negotiations. The two sides aren’t even talking right now. Warner Bros. supposedly offered Sheen $1 million per episode to continue making Two and a Half Men but the actor wants $1.5 million. Neither side has gone back to the table with a counteroffer.

On the positive side, both sides believe that a deal will be worked out prior to May 19th, when CBS announces their new fall schedule to advertisers.

That’s good news for the network, especially considering their recent timeslot experiment didn’t work out as well as hoped. CBS replaced this week’s Two and a Half Men with an episode of The Big Bang Theory. The geeky sitcom still performed well but scored a season low for an original episode in the target demo.

Sources suggest that Sheen will end up making about $1.3 million per episode — a hefty pricetag but, considering how much money the studio will make, it’s still likely a very good deal.

What do you think? Would the studio be smart to give Sheen what he wants or is that paycheck just too high? Should Two and a Half Men even continue?

I don’t watch the show but I do have an opinion. If we would understand how supporting crap like this, is just one of the many reasons our society has so many families that lowered their standards as far as what values they have. Sure, go ahead and support yet another show and man that have no family value what so ever or to say the least, a very low standard of how to be a good model for children. But oh that’s right, that’s the parents job and the parents are watching a man on tv having multiple sexual… Read more »

I don’t know what’s more amusing–speculating/bantering back & forth about whether Charlie is or isn’t worth a higher paycheck, or wondering who let a bunch of functional illiterates/trolls in here to give us their heralded opinions. At any rate, my 2 cents’ worth is that the show has maintained its level of humor over the last 7 years (regardless of whether this is your particular brand of humor, all you Victorians) and, if the network suits are responsible & intelligent enough to recognize it for the cash cow that it is, then by all means, give Charlie a bigger paycheck.… Read more »

Yeah, let’s give him $1.5 mil, so he can get arrested for intoxicated manslaughter next time and another spousal abuse charge or two. Let’s reward these jerks for their character flaws because a bunch of people make a living writing the same three drinking/bathroom/sex jokes week after week. This show is phoned in by now. Like Granma’s jello-mold salad at holidays, it’s a tradition that needs to be retired.

With all the alimony , child support ex-wives lawyers and really bad luck, Charlie Sheen’s real life is closer to Jon Cryer’s charactor on the show than his. Charlie has a bad habit of marrying Gold doggers and druggies. He was doing fine when he was spending $15,000 a week for hookers. If he walks away from a sure 50 to 75 million , then he deserves to lose it all.

Pay him whatver it takes! There are very few FUNNY sitcoms these days and this one is funny and current so just pay him and keep it on the air, PLEASE!!!!

Well iff you ask me actors get too mutch n0wadays…. i honistly think 100k a episode or less should SHUT HIM UP……. why do actor get payed that mutch….like football players.. anyway idd say give him what he wants cause i love the show but get pissed off with him moaning…..

If you don’t like it don’t watch it morons, 14 mil. people don’t agree with you. Even the reruns gets high ratings, that’s why CBS wants to keep it going.

Give him 3 million a show.Its the best show on TV today.

show has always been 8th grade bathroom humor and sex, but I do think it has run it’s corse. When the 1/2 is bigger then both adults it’s time to call it quits. Maybe the show can jump the shark and on the day Jake moves out, a girl drops off Charlies 8yr old son he didn’t know he had, and we can start the fun ride all over again but this time its Uncle Allen. HA HA HA<—Sarcasm

Put this show out of it’s missery. It’s gotten to the point that the writters can’t write anything unless it’s 8th grade bathroom humor and about sex. Time for the show to fade away…

What is all the flap about? CBS is going to pay because they have no other choice. Sheen is going back to work and all will be right with the world. What? You BELIEVED it was going to end any other way? YOU FOOL!

i agree, his soon to be ex wife is gonna get some money so smart thing to go back to work and get some of that money back haha!

Well $2 million is greedy if you ask me. I mean really I think charlie might be trying to take advantage of CBS. But on the other hand, just how many viewers does the show have? Exactly. I think we just got a fight thats just gonna blow. Even if we get an 8th season its gonna end badly most likely before the season is over. If they don’t even wanna work with each other, then its just a matter of time. I mean really. This really just proves my point yet again only this time its from an actor… Read more »

I think Charlie is worth the 1.5 million he is demanding. Kelsey Grammer got 1.6 million an episode for ‘Frazer’ and the “Friends” all got a million a piece. Charlie Sheen is the star of the the number one sitcom on tv and deserves the bucks. His off screen problems just boost his bad boy image. He’s just following the Hollywood bad boy tradition like Errol Flynn , Tony Curtis and Nick Nolte.

Sheen is going through a divorce, Ex could get 500,000 for the next 10 years, so I think he would want to keep the show going. I hope it continues, sitcoms are dying, need to spice it up a bid, bring back Rose. I like the chemistry between Charlie and the son. And also like the mother and the maid, but I don’t see the show with out anybody else, so many shows have tried. I hope the show makes it when the son is 18 and charlie takes him to a titty bar, that would be funny.