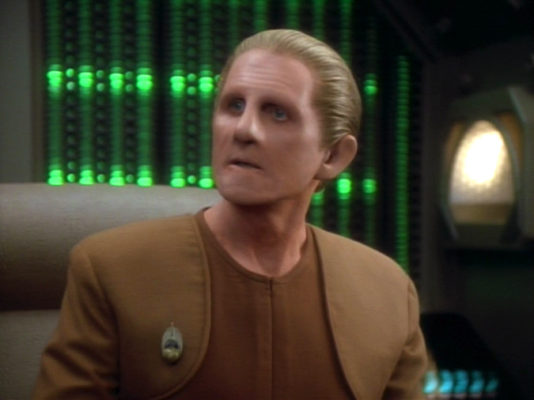 Are you a Star Trek: Deep Space Nine fan? Recently, star Rene Auberjonois spoke with io9 about reprising the role of Odo for Star Trek Online.

After nearly 20 years, Auberjonois has reprised his Star Trek: Deep Space Nine role for Victory is Life, the latest expansion for the MMORPG Star Trek Online. Speaking to io9, Auberjonois said it’s not that strange returning to the role after so long:

Well, it’s not quite as strange as one might imagine it, because, you know, Deep Space Nine—and all of the Star Trek franchises — have lived on. The joke in our community is, “when you get the Star Trek universe, it’s the gift that keeps on giving.” In the last five weeks I did a convention in Washington and then in Dortmund, Germany. I do the conventions entirely to raise money for Doctors Without Borders… but not totally altruistically, I also get to see old friends. On top of that, there’s a sense that it never really ended, in a way. Without the episodes every week, as we did, when we were doing it originally. But it’s not, like, out of sight and out of mind. Frankly, it wasn’t a big bump to put on Odo’s voice and start in…that was the case. In that sense, I’m sure if I’d done a show that started twenty-five years ago as Deep Space Nine did, and I return to it, if it were another kind of TV show it would probably be very strange. But I say, because we encounter our cast and colleagues and cast members again and again over the years…”

Later, Auberjonois revealed he thinks Deep Space Nine has been a major influence on the sci-fi genre:

Deep Space Nine had a darker, more neurotic kind of outlook in the characters. The characters had darker sides to them. So that was part of it. But also the fact that it was really a forerunner—I won’t say it was the only one—but I think it was a major forerunner conceptually of a continuing story like this—being final and complete. There was a continuing arc to it, the seven years that I think has served it well. People can stream it and each episode after episode… that has influenced television in general, but primarily also in science fiction.”

What do you think? Did you watch Star Trek: Deep Space Nine? Would you watch a reboot?

he will always be Clayton from Benson in my eyes

Yes. I am a Star Trek fan of ALL the different shows that came from the origin of Star Trek

As a devoted Trekkie, I would most DEFINATELLY watch a reboot of ANY Star Trekmovie/tv series!
And I would do it with an anticipating SMILE!

I too am a devoted Trekker (not Trekkie – true hard core Trek fans resent being called Trekkies) and used to love the more sophisticated nature of D.S.9, and I would watch a reboot.