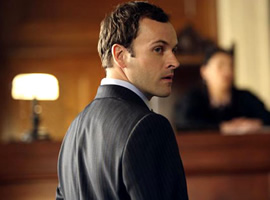 I cannot believe that ELI STONE and DIRTY SEXY MONEY are being cancelled. These are just about the only 2 shows I watch either on line or on DVR. I really believe that there is a HUGE audience of these shows that is not properly being represented. It has been done before ….good, decent shows are cancelled and replaced by a mid season junker, but shows have been saved by fans contacting the network and telling them how awful it would be if the show was cancelled……and it saved the outcome of the show. Supposidly they are going by Neilson… Read more »

I don’t care if it is gone or not just do NOT do to us what you did with October Road!!!!! A season finale that turned out to be a series finale that was full of cliffhangers! Don’t get me wrong I LOVE Eli Stone but if it was to go then just give us a darn ending.

Witjh the end of this show and Boston Legal, I will have no reason to watch ABC.

This sucks! I love this show. It’s clever and different, the writing and cast are excellent, and it never fails to make me feel good and smile, and often make me cry, with every single episode. I hope that ABC will at least show the remaining episodes, since they are finishing up the 13 episodes they had planned for this season. I’m gonna miss this show so much. 🙁 On the plus side, after Boston Legal goes off the air in a few weeks, I won’t have a reason to watch ABC any more. Stupid network!

I cannot imagine who will be put in Eli’s slot – nobody can fill those shoes!

Just so we have tried, there is a petition to save Eli Stone here: http://www.thepetitionsite.com/1/save-quoteli-stonequot–again

As usual, when I get hooked on a show that is clever, well-written, positive and different, it gets cancelled. Eli Stone is a highlight of my week. I sure wish they’d give it more of a chance.

Eli is great! If it’s not getting the attention the networks want, why not move it to another time slot? ABC wouldn’t know a good show if it kicked them in teeth!

Well I guess I’ll just have to watch Law & Order SVU on #4 or Without a trace on #2.
Eli Stone was up against some good shows but I made sure to watch E.S. and record one of the others

Another show with a postive message cut short. What a shame. It seems like the networks just don’t know how to market this type of a show.

I like this show. It’s a bit weird and I understand that it isn’t for everyone, but it has built a loyal audience. I wish the network had stuck with it. It is nicely written, touches on some great issues, and is funny. What else do they want?

I’m not going to have anything to watch, they keep canceling all my favorite shows.

This is such a clever show! Great cast, great writing! Keep it on the air! Keep people employed!