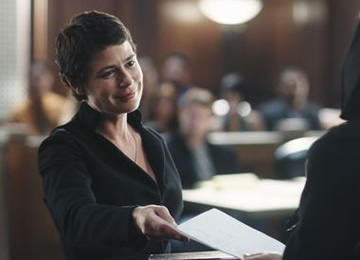 Court will soon be adjourned for ABC’s new legal drama. The Whole Truth has been cancelled.

Airing on Wednesday nights, The Whole Truth stars TV veterans Rob Morrow and Maura Tierney. He plays a powerful defense attorney who was raised on the wrong side of the tracks. Tierney is on the opposite side as a Senior Trial Assistant District Attorney whose father was a sheriff. Viewers are shown how each side builds their case, using their own version of “the truth.” The rest of the cast includes Eamonn Walker, Sean Wing, Anthony Ruivivar, and Christine Adams.

For whatever reason, most viewers haven’t been willing to even give the series a try. The legal drama got off to a very poor start right out of the gate. Whole Truth debuted on September 22th to a poor 1. 5 rating in the 18-49 demographic and 4.85 million viewers. The news got even worse in week two and the rating dropped by 20%. The last two episodes seem to have evened off, registering a 1.3 rating and about 4.4 million total viewers.

The Whole Truth’s been ABC’s lowest rated show, attracting an even lower rating than My Generation; another freshman drama that was pulled after just two episodes. Likely because of the caliber of the show’s cast and because it’s being co-produced by Jerry Bruckheimer’s company, ABC has been more patient with it. That doesn’t mean however that they’re going to order any more episodes. ABC has now cancelled The Whole Truth.

Via Twitter, co-executive producer KristieAnne Reed confirmed that the cast and crew will complete the initial 13 episode order but that will be the end. At this point, it’s unclear how many of those will actually air.

Whole Truth remains on the schedule this week but will be preempted next week for the In the Spotlight with Robin Roberts: All Access Nashville interview special. On November 10th, ABC airs the Country Music Awards. Whole Truth is tentatively scheduled to return after that but those plans could certainly change.

Though Whole Truth has been cancelled, there is some positive news for fans of the show. With the news of the cancellation coming this far in advance, producers have time to give the series some closure. The cast and crew are still shooting and are scheduled to continue until mid-December.

What do you think? Should The Whole Truth have been cancelled? Why do you think it didn’t catch on?

Best tv show ever! I have a strong interest in the law and I absolutely enjoyed watching the stories play out and especially looked forward to “the whole truth” in the end. after a year I’m still hoping the series will show up somewhere! Pleeeeeease!

This was a great series! It was funny! it was surprising! It was unpredictable! Most Court shows ARE predictable! This wasn’t one of them. I learned things from “The whole truth”! I’m sixteen, and became interesting in law because of this show. I learned so much about the phrases they said in court. My Mom and I spent quality time together. She’s in the world of law, we made bets on who did it! It was great! I can’t believe it’s cancelled. There won’t be another show like it! My favorite show of all time! =’-C

The best part of the show was the ending where the audience was given “the whole truth” and not the truth as each attorney saw it. I believe most people looked for Rob Morrow to play a character like his Numbers character. Also, Maura Tierney is best known for comedic roles by most TV viewers. At least in the older generation that would be true. Maybe the network was aiming for the wrong age group with this show. My husband and I both enjoyed the episodes we saw.

Great show, but you don’t give them a chance. You air a couple of episodes, and then they disappear so the followers can’t find it. Then they wonder why it’s not popular.

I absolutely loved this show! I looked forward to it every Wednesday night. I thought it was finally a new original show – even though there are several legal dramas, it took a fresh perspective by showing different angles to the same story. Bring back The Whole Truth!

i thought this was a good show. different perspective by showing both sides. 🙁 sorry it will be canceled!

I think good TV shows are not given enough time to find an audience. There are so many shows on that sometimes it takes awhile to get a chance to get to them, yet in searching for shows we liked and have been waiting to see back again, I am finding that at least 4 favorites so far are not returning. Tje Whole Truth was a great show with a great cast; I can’t believe it wasn’t given more time, especially when we see what apparently passes for renewable tv these days! There is so much junk on, yet the… Read more »

Truer words were never spoken! What passes for good TV, really demeans how the viewer is entertained. They treat us like we’re dumb then drop the smart, and HEAVEN FORBID clever-funny!

Really bumbed, loved the show. Maybe some other network will pick it up.

I thought it was the best of all the new shows. Too many new shows started all on the same night–3 of them in the same time slot.

You have to be kidding me! Are the powers that be totally out of touch with what the American public likes. It was one of the best shows, real entertainment….a real breath of fresh air from all those horrible reality shows

I’m really disappointed. I thought it was a great show. Two great well known actors, good supporting cast and story lines. I think maybe it could have had more advertising and maybe the 2 main actors going on talk shows to promote the show. I think they canceled it to soon.

I really enjoyed this show!! So sorry it is cancelled!