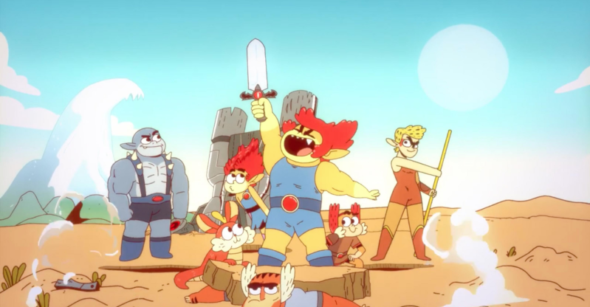 ThunderCats are back in action. Cartoon Network is reviving the ’80s cartoon for a new TV show, ThunderCats Roar.

The new animated series will, like the original, follow the adventures of “Lion-O, Cheetara, Panthro, Tygra, Snarf, and WilyKit and WilyKat, the refugees of the planet Thundera who end up on Third Earth.”

ThunderCats Roar will launch on Cartoon NetworkCartoon Network[/su_cartoon_network in 2019. See a sneak peek and check out the press release below:

BURBANK, Calif. (May 18, 2018) – It’s time again to feel the magic and hear the roar! Production is currently underway on ThunderCats Roar, an all-new, animated sci-fi action comedy series from Warner Bros. Animation. Bursting with over-the-top action and razor-sharp comedy, ThunderCats Roar boasts fresh and vibrant character designs along with a dynamic storytelling tone that promises to reignite the passionate fanbase of these iconic characters and introduce the legacy of Thundera to a whole new generation. ThunderCats Roar will be coming to Cartoon Network in 2019.

Staying true to the premise of the original series, Lion-O and the ThunderCats – Tygra, Panthro, Cheetara, Wilykat and Wilykit – barely escape the sudden destruction of their home world, Thundera, only to crash land on the mysterious and exotic planet of Third Earth. Lion-O, the newly appointed Lord of the ThunderCats, attempts to lead the team as they make this planet their new home. A bizarre host of creatures and villains stand in their way, including the evil Mumm-Ra, Third Earth’s wicked ruler who will let nothing, including the ThunderCats, stop his tyrannical reign over the planet.

About Cartoon Network
Cartoon Network is Turner’s global entertainment brand and the # 1 animation network in the U.S., offering the best in original content for kids and families with such hits as, Adventure Time, The Powerpuff Girls, Steven Universe, We Bare Bears and The Amazing World of Gumball. Seen in 192 countries and over 400 million homes, Cartoon Network inspires the next generation of creators and innovators by engaging its audience at the intersection of creativity and technology. Its award-winning pro-social initiative, Stop Bullying: Speak Up is an acknowledged and often used resource for kids and adults looking for tools that can assist in dealing with the ongoing issue of bullying.

What do you think? Are you a fan of the original ThunderCats?

Please, please, please, please apply this nonsense to a different property. I loved Thundercats and this is an abomination. It’s one thing to take artistic license and update something for a new audience to enjoy, but this feels like a spit in the face. If you’re so proud of your creativity, than come up with something original and just try not to crap on a beloved series like this.

I have been a thundercat fan since i was born and i am very loyal. Wat cartoon network is doing will forever tarnish and destroy the legacy of the thundercats. They have basically gone and turned a classic into another stupid pointless joke of a show just like they did with teen titans. I will boycott the making of this show and id like to say thank you for ruining an american classic that is right there with the original gi joe, transformers, and of course look how Nickelodeon ruined teenage mutant ninja turtles. Try coming up with an original… Read more »

“Sight beyond sight” let these producers see the light!
Jaga please guide them.

This must be for children, because no Thundercats fan will watch this because of the animation style.
I agree that the previous remake they had was great I watched every episode.
Mummmraaaaa out!

Wow…just wow. Like others have said on here, they already had a good remake that got cancelled. Instead of trying to follow in the same vein as the original or that one, this is really the best solution? Is this going to be the new trend? Taking shows that were good and making extremely watered down versions of them? Haven’t we had enough poor television made to sell products? Teen Titans Go and Power Puff Girls, sad to say but this seems to be the only point of concern for Cartoon Network these days.

The other Remake of the Thundercats was good and it was cancelled. This does not look like anything like I would watch. It is way too cartoony and less realistic like the 80s and the other remake. Why do these Companies think it is fine to ruin good 80s cartoons with this pile of filth.

that animation… you can do better than that. why can’t they use more realistic animation over here.that’s alright for some fan art maybe but I don’t want to see it if it looks like this