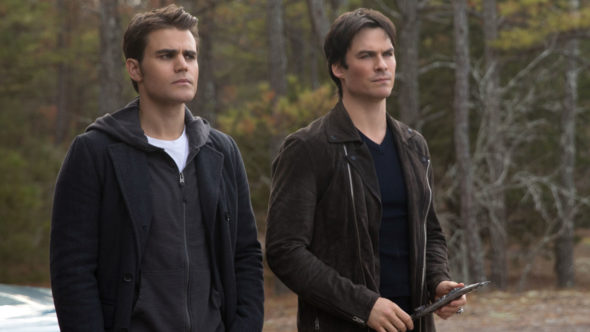 The Vampire Diaries ended in 2017 after eight years on the air, and fans could have seen a very different series finale. The other Salvatore brother could have bit the dust in the end!

Julie Plec revealed what work went into the series finale and the alternate ending she had in mind for the The CW series in an interview with Entertainment Weekly. She said the following:

“I wanted flash-forwards. Ever since we decided to put Elena in a sleeping beauty spell that couldn’t be broken until Bonnie died, I wanted to see the scene with 85-year-old Bonnie and Damon by her side, and they’re the best of friends. And then she dies of natural causes because I just thought that Bonnie deserved a rich and full life. I had this scene in my head for so long and then Kevin [felt] that stories are more impactful when you play them in the here and now. So we compromised by showing everybody just slightly ahead in their life and having those characters observing from peace, which in my opinion worked like a charm and I’m so happy we did it that way. The other big debate we had was: Which Salvatore brother is going to take the bullet for the other? We debated that so much because we could make a really strong case for either. And we finally settled on Damon was going to die. And then Kevin walked into the room and he’s like, “What’s Stefan’s life going to be like?” I said, “He’s going to be happy with Caroline and uh uh… uh, I don’t know.” [Laughs] I’m like, “You’re right, it needs to go the other way.” It was so funny because we had thought about it in the room so much that we had talked ourselves into one path, but all we needed was him to walk in and be like, “But… isn’t it cooler the other way?” And so we switched it. He gets all the credit for that.”

Julie Plec also shared why she decided to direct the final episode of the series herself. She said the following:

“Often the relationship between a showrunner and an episodic director can be fraught with tension, and I wouldn’t want to have that tension around for the last episode, which is such a celebration. And secondly, what I was able to do because I was there deciding if we could run over was then very fluidly honor the set we were leaving behind for the last time, or say a big group farewell to Damon’s car when we wrapped it for the last time, and then not to mention, honor each actor individually as they shot their last scene. So it turned into one big celebration, which somebody else wouldn’t have been able to do that without worrying about the time they were wasting.”

Were you happy with the ending of The Vampire Diaries? Tell us what you think.

I wanted it to keep going to see how Caroline and Stefan will turn out Elana and Damon I want the show to keep going I love it even though I’m done watching all of them..Wanted to see the twins grow up come on put it back on

They should have tighten up that ***** so both of the brothers would be there in the end. This is such a sad end I cried my eyes out also for Bonnie feeling so sad that Damon did return a life but Enzo didn’t. What is her happy end? Loving a ghost and still feeling lonely? This is so sad there should be a an extra episode or 2 or so 16 episodes is really not much normally it was like 23 …. I am a bit disappointed there are only 16 episodes and in the last one Elena finally… Read more »

Loved the show. Watched it all in one week. Eyes are still burning from the tears.

Tvd was one of my favorite show’s of all time. I’m so upset that it ended from season 6 on it kinda started to go down hIll. Damon is the best and his chemisty with Stefan and elana was great. I wishave they would bring the show back. I wasn’t very happy with the ending it was ok but not what u thought the show deserved. It’s great that rock and Carolina will be on the originals as guest’s but wth bring tvd back please

Wish Vampire Diraries was still on! Loved it.!

I really miss the show we need more tv series in the vain of Vampire Diaries i cant explain it. I felt like i was there with them all.And no they are all gone ,Oh my god ,i miss them its like losing a lover u really liked and its no more crazy explain that please
Deyon j

LMAO They’re like BUT WHATS STEFAN’S LIFE GONNA BE LIKE but what was Damon’s life?? he didnt really do anything with it

Now, that the Vampire Diaries are over and THE ORIGINALS will be ending soon. Is there any chance that Julie Plec could do a reboot of my favorite romantic, gothic horror series, Dark Shadows! I think she would do a great job in bringing a new re-imagining of the series to life! She could contact Dan Curtis Productions for more details in getting the new series made. Hope I get to see this someday in the near future!

Screw Plec. She didn’t care about Bonnie only Damon and precious “Elena”.

I Love Vampire Diary, But I Do And Don’t Like The Way It Ended I Don’t Because I Wanted Stephen And Caroline To Live A Happy Life Away From Mistick Falls. I Liked It Because Everybody Was Happy At The End , Stephen Wanted To Die So That Bonnie Can Forgive Him , So He Was Kinda Happy. At The End Of The Day I Wanted All Of Them To Be Together And Live A Happy Ever After Life. TEAM STEPHEN&CAROLINE