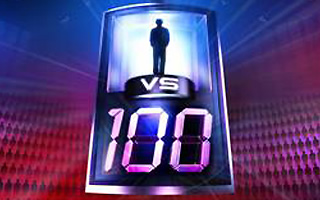 It seems that the 1 vs. 100 TV series might be making a comeback.

Hosted by Bob Saget, the game show ran for two short seasons on NBC and went off the air in February 2008. Though 1 vs. 100 was short-lived, the series has been popular in reruns on GSN and has been attracting a lot of viewers as a live Xbox game.

According to BuzzerBlog, the site for game show news, they have some reliable sources who believe the show is very likely to return to network television. If that happens, it probably won’t be back on NBC however. No word if Saget would return as host or if the format would be altered in some way.

What do you think? Would you like to see 1 vs. 100 return to primetime? Should Saget return as host?

Absolutely loved the show. If it comes back, I will be applying as a contestant. Bob Saget needs to definitely continue as host. He’s perfect!

Defintely! I’m soo glad to hear this! I would love to see Bob Saget come back!

ABC should purchase the rights to 1 vs. 100, premiere it in mid-season, and start an all-new Saturday night schedule with it leading off the night at 8pm. On a Monday night when Castle has its occasional repeat episode, they could place 1 vs. 100 at 10pm for a special sneak preview with The Bachelor as its lead-in. They could then repeat the Monday preview on Friday at 8pm and help build extra buzz for its Saturday premiere along the way. I would love to see one of the big three networks like ABC re-try Saturday night original programming (not… Read more »

Loved the show and I hope it does come back soon!

I’d love to see this back, and love it more if Saget came back. It’s a great show!

Great show and hopefully bob saget will host it again! Thanks for the tip that it’s on gsm I didn’t know

Yeah, I’d only watch if he was hosting. Would be great if it made a comeback ;).

I liked the show on Friday night , Bob Sagat did well as host. I don’t know if I would care so much for it with someone else in the host’s job.

If any game show should be brought back, why not Identity? A different concept from the standard quiz show format, yet still fun for the viewers at home to play, plus a great host in Penn Gilette.

Matt, you’re so right. That was a fun show. We should make a list of the ones we want to see again and send it to all the networks. Some of them are bound to be needing replacement shows with all the ones they’re cancelling on us.

Wasn’t it hosted by Drew Carey, or am I thinking of a different game show (and I am not thinking of the Price is Right)? I can see that Drew would not have time to host a 2nd show, but I think the world has had enough of Bob Saget and I would prefer a new face for the show.

@AuntieD: You’re thinking of Power of 10 that ran on CBS (and led Carey to get the Price Is Right job).

Oh, I hope they bring it back. I’ve been faithfully watching the reruns on GSN but it would be great to see some NEW episodes.
CBS is going to have some gaps to fill when the soap, ATWT, ends in Sept. and NBC will have a space when the reruns of the Bonnie Hunt Show are over. 1 VS 100 might do very well in those time slots.