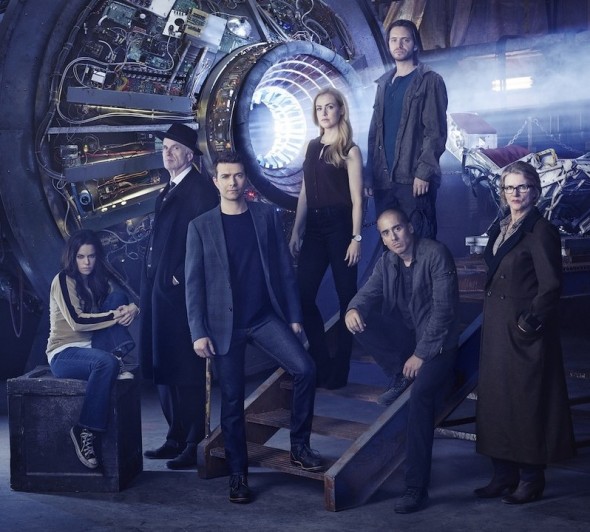 TV show description:
This science fiction TV show begins in 2043. A virus has wiped out most of the world’s population. One time traveler, James Cole (Aaron Stanford), must journey to 2015 to stop the virus from ever happening.

After surviving the plague and living for years as a scavenger during the apocalypse, James Cole can kick ass when he needs to. However, his wits are his primary tool. — he’s impulsive, bold and brave beyond common sense. Though coming of age in a time when the basic tenets of society have unraveled, Cole has somehow retained a conscience. As a Scav, he did what he needed to survive, but now is haunted by his actions. Cole seeks to fix the past via time travel, not only to save billions of lives, but also to earn redemption.

Dr. Cassandra Railly (Amanda Schull) is a brilliant virologist whose world is turned upside down when she’s kidnapped by Cole in 2015. He claims that in the future she’ll send him a message asking for his help to stop a plague that will kill billions. After he disappears, Railly’s life falls apart, and she questions her own sanity. But when Cole returns, she’s drawn into a mission to help prevent the viral outbreak. As a doctor she has taken a vow to do no harm — but what does that mean when harm must be done to save the world?

Jennifer Goines (Emily Hampshire), an erratic, ranting and seemingly unhinged math genius, meets Cole in a high-security psych ward for the criminally insane and leads him on a twist-filled journey to track down the virus her estranged father created — the virus that will eventually become the plague that destroys humanity.

Jones (Barbara Sukowa), born Katarina Werner in Dresden, Germany, is a former renowned physicist, who creates a time machine which she hopes will restore the world. Having lived through the plague and seen the loss of billions, including those closest to her, Jones will let nothing stand in the way of her mission. Determined, bold, and unapologetic, Jones tells Cole it is their fate to sacrifice this dark future in order to regain what they’ve lost.

Ramse (Kirk Acevedo) and Cole are like brothers. As young scavengers, they faced death together too many times to count, and their shared history has made Ramse extremely protective of Cole. Ramse is cautious, distrustful and has a thorough understanding of human nature. This often leads to conflict between him and the others in the Temporal Facility. It’s this conflict, and his relationship with an outsider named Elena that tests his loyalty.

Aaron Marker (Noah Bean) is an enterprising political insider who is in love with Dr. Railly. Confident and discerning, Aaron is chief aide to Senator William Royce. But when the love of his life claims that she was kidnapped by a time-traveler, Aaron doesn’t believe her. Though the two have a longstanding relationship, they struggle to get over this hurdle. Nonetheless, in an effort to keep Railly safe, Aaron becomes deeply entangled in the plot to stop the 12 Monkeys.

Tall and pale with a gruesome scar, the “Pallid Man” (Tom Noonan) emerges from the shadows to stop Cole and Railly in their pursuit of the 12 Monkeys. Elusive and eccentric, he leaves a trail of bodies, perversely shrouded in flower petals, in his wake.

Series Finale:
Episode #47 — The Beginning, Part 2
When all hope is lost, Cole must complete his cycle so that his younger self will one day arrive at the end with the answer.
First aired: July 6, 2018.

What do you think? Do you like the 12 Monkeys TV show? Do you think it should have ended or been renewed for a fifth season?

Great show. I’ve watched the show from the beginning. However the SyFy channel has a history of cancelling excellent shows.

This has been a great series and I will miss it. Great actors. Sorry this Season 4 will be the last.

Looking forward to season 4 but sad that it is the finale.

The wife and I have a great time watching the show together. We hope to watch at least seven seasons of 12 monkeys.

People See, Monkies Do. They outshine and outclass the predecessor movie. It is so cool and smooth. Well written so that you have to watch it on demand after initial showings in order to cement to remember and relive all WTF plots. If you’ve felt it good enough to renew for Season 4, well man, keep going back and forth!

Definately want some closure with the characters without just disappearing from the air like so many shows I watch in last few years without an ending,.

Show had been cancelled! It will air its 4th and final season next year! This upsets me greatly! This is a fabulous show with great indepth, well thought out charters, excellent cast and writers! The plots are always deep, we’ll thought out and exicuted in outstanding fashion! So much better then the movie.Please if there is any way DO NOT CANCEL!

The show is going to end with season FOUR! It is not cancelled. The ratings dropped HORRIBLY in season two, and SYFY figured they would get worse in season three(and we will know in 2 days) so they decided to give it a fourth season and binge the 3rd to avoid HUMILIATION, which they may get anyway. Be happy there is a 4th season. No show with live ratings under a 0.10 should ever be renewed. Not now, not ever.

I couldn’t agree more! The show is better than the movie and I too love the characters!!! Please DO NOT cancel!!!

Please continue this series for seasons 3 and 4. Let the creator finish it. great show

Last season the show averaged a 0.25 PER EPISODE. it is now averaging a 0.11 PER EPISODE. Do you really believe that this show should return? It’s a good show, but unless Hulu is going to help keep paying for it or it is taken over by Netflix, you can’t renew what would be the lowest rated scripted show in television. A 0.00 is snow. Think about it.

They just renewed it for a third season for 10 episodes

Your prayers were answered. The show was renewed for a 10 episode season three. They didn’t even say if it is the final season. If they were willing to bring it back with a 0.11 rating, they could bring it back again. Happy days for you.

Thrilled that there’s another season starting!!!

I am a big fan of Amanda Schull. I hope this series returns.

I think 12 monkeys should not be cancelled