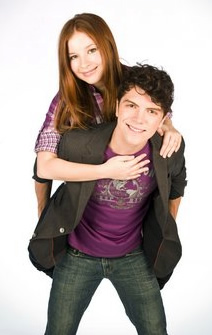 Tom and Jessie have their share of challenges as 18-year-old newlyweds. Unfortunately, their 18 to Life TV show has bigger problems. It’s been cancelled.

An import from Canada, 18 to Life debuted on August 3rd to just a 0.4 rating in the 18-49 demographic and only 988,000 viewers. The second episode dropped to a 0.3 rating and 846,000 total viewers. That put the pair of episodes in last place in both categories. Later episodes attracted even fewer viewers.

After Tuesday’s episodes, The CW has decided to pull the show from the schedule. That leaves six episodes on the shelf. They’ll be replaced by repeats of Life Unexpected. New episodes of that drama will debut in the same timeslot on September 14th.

Though 18 to Life may be finished on The CW, the comedy has already been renewed for a second season in Canada. The CBC finished airing season one in April and production of season two is currently underway.

Hopefully fans in the States will be able to buy the show on DVD or the show will be picked up by a cable station.

What do you think? Are you sorry to hear that CW has cancelled 18 to Life? Do you think it’s worth watching?

I like this show, and I think it’s far better then a lot of the promiscuous stuff that’s out there.
I think it’s cute how she’s always telling people she’s not pregnant.

I liked the show..I think a show about married young newlyweds is a much better premise then all that promiscuous crap on a lot of other shows.

I loved how she’s always snapping at people how she’s not pregnant, lol.

I also like the show b/c I always wanted to marry young (but didn’t get to).

): THIS WAS SUCH A GOOD SHOW ! WHO WOULDN’T LOVE IT?!
Tom & Jessie made the perfect couple. it just doesn’t make any sense to me.

I can’t believe this show was canceled. I was frantically looking to see if I would find the air date to the show but I couldn’t so I went online to check on the cw and kept refreshing the page to see if it was some sort of mistake or error and when I saw this! I have to say I feel sad. I mean all my friends would watch it and we would talk about the previous episodes. But yeah this blows I was really getting into the “18 to life”.

Hello, I’m sorry this might have the wrong “subject,” but because it is about 18 to Life I didn’t know where to put it!! I really liked the show 18 to Life, and had only managed to watch 1 episode on TV before it was pulled. My brother stumbled on it last Tuesday night, after never hearing about it before. I certainly would have started watching it earlier, but had never seen any commercials or anything for it. I have seen billions of adds for Nikita (for the record, I have no interest in watching that show), and all of… Read more »

sucks!! i loved this show!! it was great! does anyone know if they show it online????

I am not heartbroken that the CW canceled the show. I watch most of my shows online anyways and since CBC is filming a 2nd season I will just watch the episodes online, but I have been very disappointed in the CW since it went from the WB to the CW. They got rid of all my favorite WB shows like Gilmore Girls and Charmed didn’t last too much longer after the switch. The WB used to be my favorite channel. I hate it now and barely watch it. I do have to say that they did throw away a… Read more »

Why did they cancel it? i love this show i would always watch the show cw sucks

All of the critics complaining that 18 to Life is too realistic a portrayal of responsible teenage sexuality need to take a look at what they are saying. They are advocating for the glamourised, sensationalised, carefree, unrealistic portrayal of sexuality that is rampant in CW programming. Ostroff can get off the couch, out of the building, leave her company car in the parking lot, and take the bus home. Who approved Fly Girls? Really, that is what she thinks is the best way to go! She already killed UPN; how many chances does she get? Can i have her job?… Read more »

of course it is cancelled. why did the crappy white channel launch it in august? teens are out not at home in front of the tv.

plus where was the promo? exactly, there was none.

Well, i guess to still watch it being in Canada, the show isn’t anything new or groundbreaking, but it kinda goes in a different direction that all other shows seem to steer towards. In any case it’s to be expected that the show would be cancelled, the production value isn’t all that great and the actors are completely unknown to the US public except for those that might have caught “Life With Derek” with Michael Seater on the Disney channel.

The show has some good lines in it that had me chuckling. But I can’t say I’ll miss it. It was simply too derivative. Such a shame. I’m always rooting for Canadian shows in the US.