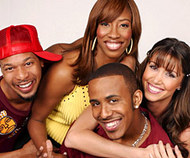 When the UPN network closes its doors (along with The WB network) in September, it will be the end of over 10 years of programming from the Paramount-owned network. Some of the UPN shows will continue for another season on the new CW network. Here are some that won’t be part of the new CW schedule.

Cuts – A spin-off series of the popular One on One series, this sitcom centered around a barber shop. The last original episode of the second season (#31) aired on May 11, 2006.

Eve – This sitcom starred Shelly Williams as a young beauty navigating the dating world. The series lasted three seasons and 66 episodes. The last original episode aired on May 11, 2006. 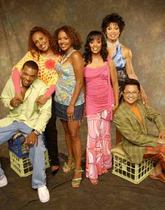 Get This Party Started – This short-lived party-planning “reality” series was cancelled a week after it debuted in February 2006. Former Extra reporter Ethan Erickson and Laguna Beach star Kristin Cavallari hosted the series.

Half & Half – Essence Atkins and Rachel True played half-sisters who discovered each other as adults. The series received two NAACP Image Award nominations for Outstanding Comedy Series as well as multiple cast nominations. The popular sitcom ran for four seasons and 91 episodes. The last episode ran on May 15, 2006 and left off with Mona choosing between Chase and Lorenzo. Though the series is not officially on the CW schedule, there has been talk that Half & Half may return mid-season.

Love, Inc. – This show centered around a full-service dating consulting firm and its staff as they deal with their own romantic entanglements. Cancelled after one season and 22 episodes, the last original show aired on May 11, 2006. If the UPN hadn’t folded, this show probably would have been renewed. BTW: this was the show that originally starred Shannon Doherty but she was replaced after UPN bought the pilot episode. 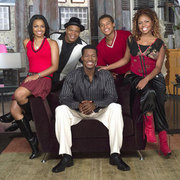 One on One – After the some of the characters moved to LA for the show’s fifth season (because of budget cuts), the show was cancelled. Episode #113 aired on May 15, 2006. The cancellation of One on One just three days after the broadcast of this episode left several loose ends unresolved.

Sex, Love & Secrets – This series starring Denise Richards was cancelled after only four episodes aired in the Fall of 2005. Reportedly 10 episodes had been shot. The series was originally titled Sex, Lies & Secrets, but UPN dropped the “Lies” and added “Love,” which they believed better reflects “the direction, tone and pacing” of the series.

If any of these series receive a last-minute reprise, I’ll be sure to let you know! Stay tuned!

Its funny how they get mad about us having our own television station, but they are cutting all of our good black telvision shows. We will eventually be cut from the screen. I loved all the shows looked forward to seeing them on monday and tuesday nights.

I wish the cw would at least finish the ending to the seasons that were cancelled. You have Mona in limbo on half & half, Breanna in bed w/ d-mac on one on one, and JT and Nick in the closest on Eve. I would like to know what happened seeing that they were GREAT shows. I wish they would bring these shows back, especially EVE.

cuts was funny as hell. run your fingers through some kev care,lol. dam i miss that show.whats up with the good shows gettin cancelled.

I felt devastated when One on One was cancelled. I have been watching the show since day one and I think all of the fans deserve a proper closure. What ever happens wit Breana and Arnez? i need to know!!!

I really loved the shows EVE,Half & Half,One on One,and especially South Beach,which they need to bring back. Stop cutting the great shows because viewers are not happy.

I hate when good shows aren’t given a proper ending. i don’t mean that everything has to be happily ever after. seinfeld’s crew all ended up in jail and that was ok. but the way that one on one ended is wrong! we have to have some sort of conclusion. obviously, the shows probably not coming back. so someone write the story. i don’t care how, this shows fans deserve better.

please bring one on one back please i need to know what happen at the end of the show. i really do miss it PLEASE BRING IT BACK!!!!!!!

please bring one on one back please i need to know what happen at the end of the show. i really do miss it PLEASE BRING IT BACK!!!!!!!

I watch all the old episodes of One on One everday on channel 298 on direct tv. I miss this show so much. To me we have too many reality tv shows and not enough entertainment tv that kept me laughing on One on One, Girlfriends and Half n Half. I think when the character Toni left girlfriends the show has no more spunk. I wish they can bring all the shows back.

on the show one on one did breanna lose her virginity

please i am dieing 2 know how one on one ends i dont really worry about others just pleaz bring back one on one even if its 2 tell how it ends. Did Arnaz find Michelle? Did Briana and D-Mack start dating? Or will Briana and Arnaz getback together? Pleaz i really need 2 know!!!!!!!!!

Im more than upset that you guys took off One on One, that was really my show and i really need closure with that show. I really need to find out what ever happens with arnez and breana. Does D-mack and breana ever hook up and become a couple??? PLEASE PLEASE I REALLY NEED TO KNOW. FOR THE LOVE OF GOD PLEASE BRING IT BACK.

The Parkers should of stayed on the air..Irregaurdless if the professor and Nikki Parker Got married…….That show was the best…I wondered why Cuts,Eve,Love Inc and then other shows werent on the air no more……..Those were some good show