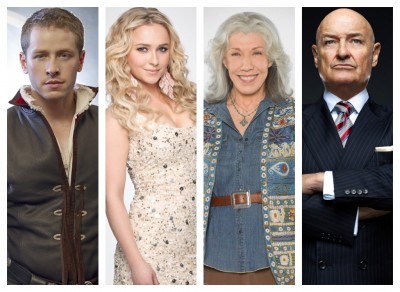 Is your favorite ABC TV show returning or has it already been cancelled? What TV series have been renewed for next season? How many episodes are there?

Below is a list of all of the regular ABC series that have aired (or are expected to air) during the 2012-13 season — roughly September 2012 – August 2013. (I’ve also included Summer 2012 shows because people will be wondering about them too.)

Using this “cheat sheet” you can tell where your favorite ABC television program stands; how many episodes are in the current season, when it’ll be back on the air and, of course, if it’s already been renewed or cancelled.

If you can’t find a particular ABC program on this list, it may have been cancelled last season (2011-12) or the one before that (2010-11) — time flies doesn’t it! For a list of cancelled or ending shows from all networks, you can go here. It may also be possible that we missed something so feel free to let us know in the comments below.

Please don’t cancel Castle. So few good adult shows on,(hate “reality”, vampire, and non-funny comedies that promote sarcascm, nasty comments about adults,etc). Castle, NCIS, Leverage, Person of Interest, The Mentalist, CSI, CSI-NY, Criminal Minds, Bones, Hawaii 5-0, Covert Affairs,NCIS-LA & Burn Notice are the only really good adult shows on. Some idiots at TNT have dropped Leverage (hopefully another newwork with some brains will pick it up), so to lose Castle would be a disaster. Castle is the ONLY show on ABC that we watch. Please give us the one reason to watch ABC. If you are really smart you… Read more »

Where are your heads ABC……..never mind, I am sure I know and it’s pretty dark up there, huh? I am also so OVER those mind-numbing reality shows like the Bachelor and the Bachelorette. You finally put on some decent, exciting and addictive shows like “666 Park Avenue” and “The Last Resort” and you geniuses go and cancel them. You over-paid, empty-headed idiots really do have a low opinion of your viewing public, don’t you? Many of us really do have more than half a brain in our heads and enjoy some challenging TV. Please wake up and don’t cancel these… Read more »

i hate abc so much…havnt liked anything on this network since lost…666 park avenue had plenty of potential… but instead they keep renewing the bachelor , very smart choice there abc… idiots

Maybe because the bachelor has 10 million viewers and 666 park avenue less than half that? At the end of the day it is the viewer who cancels the show and not ABC.

I hope Malibu Country gets renewed. It is so nice to have a show on ABC that we can watch and laugh together as a family. Very few shows are family shows.

Can some one please please explain to me why they cancelled a great show like 666 Park Ave but yet renew the stupidest show s ever The Bachelor and The Bachelorette ?
Same crap everytime they get together drink fight with each other…right until he/she picks one,,,only to break up in months !!! Really, I would love an answer. Thank You !

I agree. I hear Scandal and Nashville might not come back either. They already cancelled 666 Park Avenue and Last Resort and we enjoyed both. And they put our favorite, Revenge, on a bad night. We used to just leave the TV on ABC almost 24/7 but I can see I’m aging out of this network as the stupidest show I’ve ever watched, Happy Endings, is still in the running as well as The Bachelor. If the two first mentioned get cancelled I guess I’ll be checking out the other networks. Good going ABC. Have fun entertaining the vacuous.

So they cancel a great show like 666 Park Ave but bringing back one of stupidest shows ever “The Bachelor” So they get rid of a great show but keep a show that is the same lame thing over and over again….women fighting over some guy who is only going to dump them months after picking them. Who is running this network anyway ?

Its also cheapper to produce The Bachelor than 666 Park Ave

Please leave Last Resort on air. Such a great show about the navy, and submarines. Has me on the edge of my seat every Thursday

please save the last resort. do not cancelled the show.

i love body of proof sure hope it is coming back

To my knowledge, it is this season. I’m not sure yet about the next.

I am proud to say I have never watched Survivor, American Idol or Dancing w/ Stars et. al. I wish these contest type shows would just DIE off. I find it amusing to watch Wipoeout & I really like The Amazing Race when I get to see it. I am awaiting the new season of Body of Proof & the only other appointment TV for me is Grey’s Anatomy “the the thats all folks” I was hoping Alcatraz would be a mid-season replacement but sadly NO. It started off well but 1/2 way thru it went to far to fast… Read more »