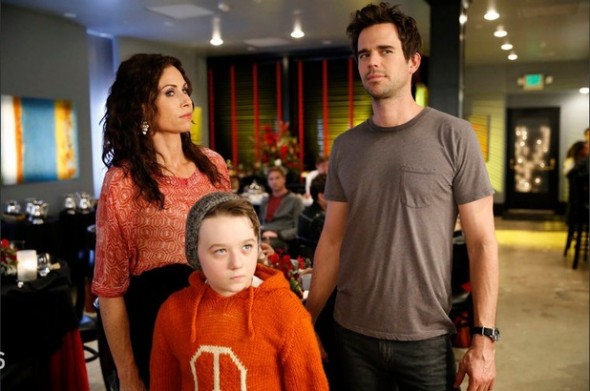 The peacock network doesn’t want quite as much of About a Boy. Deadline is reporting that NBC has trimmed the sitcom’s second season from 22 to 20 episodes.

About a Boy has been really struggling this season and it seems very likely to be cancelled by spring. It’s currently averaging a 1.2 in the 18-49 demographic with 4.15 million viewers. That’s down 36-40% when compared to last year’s figures.

zWhat do you think? Do you like About a Boy? Why aren’t more people watching? Do you think it should be cancelled or renewed for a third season?

Please give them a third season. I am sure it gets harder to keep Marcus a “boy” as time goes by. But his relationship with Will is such a good story line for young men struggling without a father in their everyday life. Each character does such a great job. Marcus’s girlfriend is such a challenge for his personality type and Minnie Driver’s Fiona is just priceless.

Please renew and don’t cut episodes and changing schedules. This is a show I really looked forward to each week.

I’m with you Kathy, this show is filled with so many good reasons to keep it on the air, and not a single one to cancel it. I hope more people will vote to keep it.

Please don’t cancel this show! We LOVE this show! My husband and I look forward to this show every week. We love the characters. And it is one of the few shows that make us laugh!

This was one of my favorite shows. I looked foward to it every week. Please bring it back or put it on cable some where.

I really love the show, I hope that it continues. It’s different from most shows on tv, it’s very refreshing!

I think Boy has had it. Instead of Boy following the Voice tonight April 14th , NBC has Undateable and One Big Happy scheduled instead.

Love this program. Sweet and Smart hard combination for most shows. Losing this program along with Parenthood and the long wait for Downton Abbey has sent me to WNYC (radio).

Best show in YEARS. Refreshing, loving, fun, silly, and best of all GREAT!

I don’t expect Boy to return until The Voice finishes. Voice has already replaced 3-4 Boy episodes.

Please don’t cancel! It’s one of my favorites!

I miss Samantha, plus the show has just gotten raunchy. Blahh… I love the actors, but the
content and writing stinks.

I agree with Nicole. It’s my favorite show, and I would hate to see them cancel it. They lose viewers over and over by changing show times and days (shows in general), and leaving us hanging for weeks on end with no notice as to when a show will be back on. Stop interrupting programming for the Voice and other things. It really disrupts the flow of the storylines and makes it very difficult for followers to have any continuity and loyalty. Call me old-fashioned, but it was much better when shows began in September and went straight through to… Read more »

I love this show. It’s a weekly regular.

Can’t understand why the network would
cancel it. Quality writing and acting, and it always makes a good point. We LOVE this show!

Why would they cancel this show?! It’s so great! They take it off the air for a month in December, and then don’t understand why the ratings fall? It’s always the same story. They screw around with the schedule, and then blame the show! Soo frustrating! We LOVE his show!