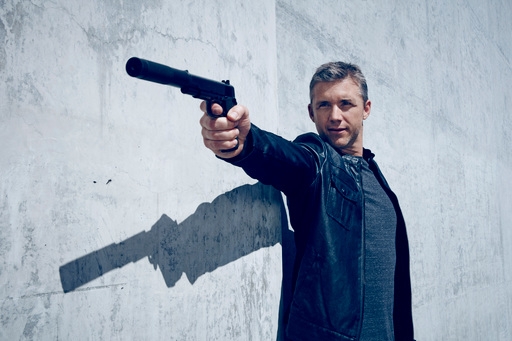 TV show description:
After being sworn in as Vice President of the United States, widowed former law professor and Wisconsin Senator, Natalie “Nate” Maccabee (Sharon Stone), receives a gift from sitting President Thomas Eckhart (John Shea), himself a former VP. That gift — an ornate key bearing a Freemason insignia — is presented as a ceremonial key to the VP’s official Naval Observatory residence.

Using the key, Maccabee uncovers a secret room, behind a fireplace which also bears the insignia. Her Chief Steward, Malcolm Millar (Gerald McRaney) congratulates Maccabee on breaking President Lyndon B. Johnson’s record for uncovering the room. [n.b. In reality, Vice President Walter Mondale was the first VP to live in the official residence.]

Inside the room, Millar shows Maccabee the original U.S. Constitution — the only complete edition of the document. It alone contains Article II, Section 5, which grants the VP special, covert powers, and the use of a dedicated secret agent to deploy when the Republic is in dire peril.

The first secret agent to fulfill this role in spirit, was none other than patriot Nathan Hale. Hale’s final words, “I only regret that I have but one life to lose for my country,” are the credo of Agent John Case (Jeff Hephner), the secret agent at Maccabee’s disposal. With a background in Special Ops and the CIA, Case is cool under pressure, and fully equipped to do the VP’s bidding, on missions too confidential for the FBI and CIA.

Chief Justice Caleb Thorne (James Earl Jones), who swore-in Maccabee, is part of the government secret circle charged with upholding and protecting the entire U.S. Constitution, including the top secret Article II Section 5, which provides for the Agent X program. Thorne is a much needed ally to Maccabee, as she assumes her classified duties.

Less of an ally, opportunistic Speaker of the House, Miles Latham (Mike Colter), is in Maccabee’s corner, when it suits him, and her adversary, when that better serves his aspirations and ambitions.

FBI Director Edwin Stanton (Jamey Sheridan), is a hard-nose law enforcement official and soft-hearted family man. When his daughter, Missy, is kidnapped, Maccabee learns on the job how to exercise her special powers and dispatches Case to the girl’s rescue.

What do you think? Do you like the Agent X TV show? Do you think it should have been cancelled or renewed for a second season?

Please reconsider canceling Agent X. I enjoy the action, it’s not just random violence which appears on some shows. I like the actors and the concept.

Don’t cancel. A great show. Had t record at the later hour but loved it!

It never ceases to amaze me! Good programs are cancelled and lousy program are renewed. Agent X ranks as one of the good programs. But perhaps the decision was influenced by ‘OTHERS” in power 🙂

Give some thought about the other things going on during the airing of this new series ! Campaigns, world news about terrorism, football on Sunday nights… COME ON !!! TNT, don’t cancel something that was plugged in to a slot that has a lot of other things going. I am going to completely give up on TNT if they are going to cancel everything after only one season. I subscribed to satellite TV to get better programming that is available on standard, regular TV channels, but TNT isn’t holding up to the challenge of offering better programs for more than… Read more »

The show is watchable. It’s not unique, but that’s not necessarily a bad thing. It’s another weekly “let’s go out and take on/beat up a bad guy” action show. But, with the exception of a few shows like The Blacklist, these types of action shows don’t always do so well as evidenced by the recent demise of “The Player” on NBC that lasted 9 episodes. Not sure why anyone would describe the main character (John Case) as an American James Bond. The only simialarities I can see is they are both “cool” and both manage to magically avoid being killed… Read more »

Love this series. Do not cancel.

I missed the first (pilot) and the second episodes. Watched them on TNTdrama.com. Let this series develop a little more before making any decisions. It has promise. It also could get scripted poorly by dragging impossibilities into the mix of things that could realistically be accomplished. Right now, I’m tuning my Genie to record it, just in case. What I like is the stellar cast members that appear to be the series’ regulars ! Sharon Stone has never been one of my favorites, but I actually like her in this !! Seems (so far) to be a fairly decent action… Read more »

First all George Lazenby was not a really James Bond just the one movie does not count. So please do not compare a James Bond movie to a t,v. show. Agent X has a totally different plot from a Bond movie. Let’s gave it a chance first thank you.

Cancel this show please . It’s a lot of crap! Everything is bad

I noticed just how many negatives you’ve received, so just what does this say about your opinion. Out of some 200+ comments yours is the only one of dissension.