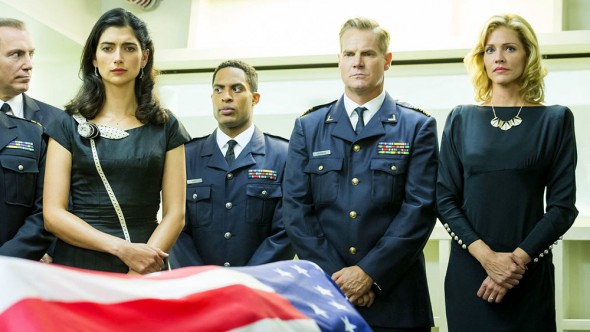 Make happen please. All my gift requests from family will be Ascension swag.

Perhaps they can be pressured into a 2nd season. https://help.netflix.com/en/titlerequest

In this new era, where a tv series can have as little as 3 episodes and still be called a ‘season’ , content quality has greatly diminished. However, with Ascension we finally get a series with a great premise and virtually unlimited directions in which it could go, what happens? Cancelled, after a 6 episode ‘season’

Reader
Keep cancelling the good shows why DONT YOU

SYFY do this with ALL of their GOOD Space/sci-fi shows. Just because it doesn’t get the “MILLIONS UPON MILLIONS OF VIEWERSHIP”. It’s like that Britney Spears song…’Gimmie More, GIMMIE MORE MORE MORE’. Bloody despicable, I say. They’d rather put on some crap that the majority of the population puts on as background while playing scrabble than something with a good plot, mystery, SPAAAACccceeeeee..stuff, and so on. I just don’t GET these TV hosts. They should be fired, and get someone in that actually APPRECIATES Space and sci-fi shows. God forbid there be any Scifi on the SYFY network!!! OTHER GREAT/GOOD… Read more »

So typical of TV these days. I really enjoyed the show. Just like I really enjoyed Hulu’s “The First”. And then they cancel and leave everything hanging, nothing resolved. it shows disdain for the viewing public.

I enjoyed this series a lot, and there are many directions that can be written from the interesting developments so far. I wonder what was left on the cutting floor.

I can’t believe this didn’t get another series ☹️

OMG! I JUST SAW THIS SHOW AND IT WAS SOOO GOOD!!!! I JUST SEARCHED FOR THE 2ND SEASON BUT THERE ISN’T ONE!!! PLEASE GIVE US A SECOND SEASON TO TO THE SERIES!! PLEASE!!!!

I just recently found this show on Netflix and really got into it. I was saddened to find out there was NO completion to this awesome show.

This was an authentic disrespect not even from SyFy, but from Netflix as well. They should warn us before airing it on the streaming. So I wouldn’t waste my time watching it! Didn’t like that attitude!

Plz plz plz pretty plz xxxxxxxxxx make a second season in well gutted don’t watch much but this was awesome.

Please make a second season it was unbelievably creative.

Yes I would/want to watch it as a TV series. Get writing please, you cant leave it like that

yes my husband and i really enjoyed watching it