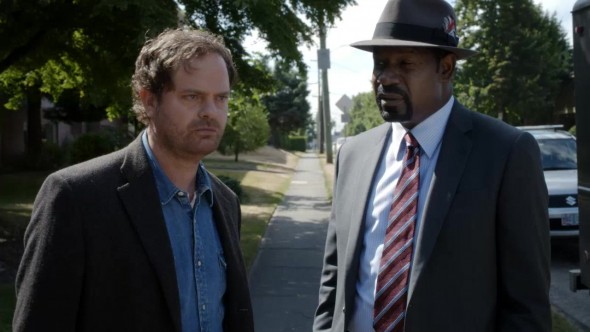 For the most part, FOX has really been struggling this season. When it comes to new shows, Empire is a hit and Gotham’s doing okay but Utopia, Mulaney, Gracepoint, and Red Band Society were dismal failures in the ratings and have already been cancelled. How’s Backstrom doing? Will it survive to see a second season?

With American Idol as a lead-in, the series debuted on January 22nd with a 1.9 rating in the 18-49 demographic and 7.98 million viewers. That was an okay start but there wasn’t much serious competition on the other networks.

In week two, Backstrom had to start competing with Scandal on ABC and the ratings dropped more than 30%. In week three, NBC’s The Blacklist moved to Thursdays at 9pm and Backstrom dropped another 30% or so once again, falling to a 1.0 in the demo and 3.64 million.

It’s pretty clear that, while Backstrom may have some devoted viewers, it’s not priority viewing for most people on Thursday nights. It’s pretty consistently in fourth place in its 9pm timeslot and is now FOX’s lowest-rated drama.

With numbers like these, it’s hard to imagine that FOX will renew Backstrom for a second season. FOX has some serious schedule problems but this show doesn’t seem to be a solution. There are eight episodes left in the season (only five are scheduled) so Backstrom has some time to prove itself with better ratings. This seems unlikely but sometimes miracles do happen. Backstrom could certainly use one.

But, what do you think? Do you like Backstrom? If you ran the network, would you cancel or renew this series for a second season? Would you change anything to attract more viewers?

Keep it! I watch s lot of tv and this is a refreshing change. I look forward to it every week. Reconsider and keep this show. Dont let this be in the cliche of the good die young. Give it a chance to get more viewers hooked as i am

Please keep this show! We love this show, my whole family watches this show. All the characters are interesting and compelling. Do not cancel this show!

Keep it! Characters are great!

Keep Backstrom! He’s hilarious. Love all the characters. Something we actually look forward to watching although we record it to watch later because we do most of our shows like that.

Why not put it on a night w/o so much competition from established programs ?
Oh, BTW, I really like this show.

KEEP BACKSTROM! Such a fresh breath of air! Love the quirkiness and all the characters. Such a great show!

I enjoy Backstrom, but i also enjoy Longmire, Justified,

i like Backstrom. it was one of the few shows this season that i didn’t have to force myself to watch in order to start liking it.this is a show that needs some time to develop and gather a following. there are really getting to be less and less good shows and they are too quick to cancel a show that has a lot of promise.

Love the show. Characters are original and interesting. Please FOX restrain yourself

CANCEL IT. Doesn’t stand a chance against Blacklist & Scandal.

I love this show. It’s a good show with great characters