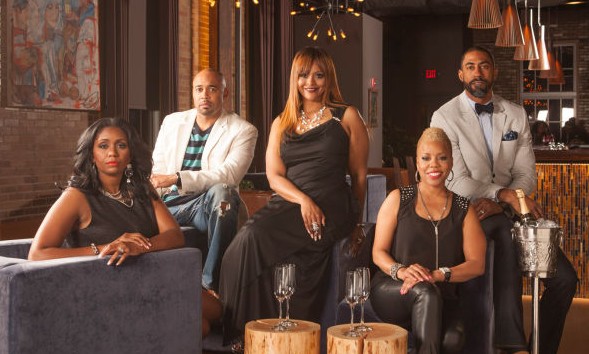 A reality show, BAPs follows a group of affluent African-American friends from St. Louis who self-identify as “BAPs” — Black American Princesses and Princes. The show debuted on July 23rd to weak ratings.

Today, the cast received bad news emails from Asylum Entertainment (which produces the show) which reads in part, “I wanted to let you know that Lifetime informed us that they will not be airing the last 2 episodes of BAPS. We’re very sorry it panned out this way. It’s very difficult to build an audience for an ensemble show like this one, but we’re very proud of the show and happy to have had the experience working with you.”

What do you think? Did you watch BAPs? Would you like to see the remaining episodes?

@ Margaret Jones, you don’t need to be afraid of the future of black people because you didn’t create them in the first place.

I think the last two shows need to returned

I know/knew these people. I grew up with some of them and I was embarrassed by their behavior and their portrayal of women first. Secondly, I was disappointed that they acted foolishly as educated African-Americans. Third, I was just disappointed in general that they displayed our community as a whole as foolish and without class. I hope they got paid a good price. But I wonder, what is the price for silliness?

I would luv to finish watcHing the show i think it was very interesting and gud. Please bring it back. . Lifetime was showing it to late do to many people didn’t no about it. They didn’t even advertise the show so people could no it was going be airing. They only cut it cause they was successful black women and men point blank period. Haters now ya need to step ya game up get that show back up and running and **** on lifetime. **** they got that wack ass tori show Gtfoh

I think that some of the BAPs represent Africian Americans women in an negative light. I believe, it is reverse discrimination to the finest. For well raised and educated women they behave like like trailer trash and are no different from ghetto girls.

This Show was destined for failure, it was a horrible portrayal of Black classy women of essence and color…The so called BAPS acted worst than the regular if you will lower class black females that aired…they could have done better in representing Black women and most of the Black high class women of the STL. GOOD i can rest better knowing that representing is not aired any longer..and for the Bring It haters..that show is a positive representation of young Black women during something great with thier lives and building Class Respect..Not Hoodrat Appeal..Get with it HoodRats!!!!!

I enjoyed this show. I think it shined a new light on African Americans from different walks of life. I also enjoyed the fact that everyone had a different perspective on the meaning of the term Baps. I would have liked to see the last two episodes.

I’m afraid, very afraid for the future of black people!!!

All these positive comments are clearly perpetrated by those who either know the cast members or the cast members themselves because these comments are totally the opposite of the social media comments sent prior to the cancellation of this farce of a show. That or clearly those who are commenting have no clue as to what a real BAP is… If they did then they would be appalled and embarrassed of this show! Lifetime did the right thing by pulling this show…. It wasn’t reality!! It was all wrong and disrespectful to the real deal!!

Honestly I didn’t notice the show was off the air until I was cleaning up my DVR timers and I thought, “Oh yeah! What happened to those people?”. It was just ok to me. The best episode was the one when they debated on the radio about what it means to be a BAP. That was thought-provoking. Lifetime can easily add the last 2 episodes to the website for those of us who care to see them. That shouldn’t cost anything since the 4 full episodes that aired are on the site.

I’m pissed bcuz it was my new fav reality show