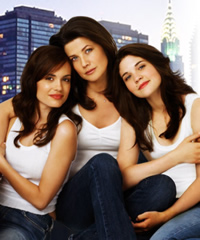 TV show description:
A drama that follows the highs and lows of single mother Lynn Kerr (Daphne Zuniga) and two daughters Sophie (Sarah Foret) and Karen (Torrey DeVitto) as they move from a small town in New Mexico to New York City.

Lynn dreams of being a fashion designer but takes a job in a boutique to pay the bills. Karen was a successful model back home and is unprepared for the fierce big city competition. Brighton doesn’t fit into her new prep school as she discovers it’s populated by wealthy and privileged kids known as “the beautiful people.”

I watched the 16 episodes over two nights on Netflix… the acting was supberb!…The story lines believable… found this site, for I was hoping that there would have been a 2nd season..wanted to find out the ending…. reading the other commenters here… I am dissapointed too, to not have found out the ending intended for the lives protrayed on Beautiful People….yes, I also agree with the other writers, why would a show like this be cancelled? Please write me, if anyone can find out what was intended for the modeling sister Karen…

I’m soooo ticked! I wanna know how this ends!!! There should def be a rule out there in tv land that when you get the warning that you have to pull the plug because ratings aren’t that great…at least come up with a finale episode that leaves us with some dang closure!!! How can they do that to us! They owe us that much for watching the whole 16 episodes!!!

I found this on netflix also SO sad they cancelled it I LOVED IT – I think the network has a huge problem with promoting shows I NEVER EVEN HEARD OF THE SHOW til recently yrs after it was airing on television YET all the dumb, stupid, simple minded, no -chemistry, bad actors, boring story line etc. shows are renewed and some over n over again! WTH?? I agree there is at least 3 shows still going I would give the ax to to bring this one back or to at least rap it up with an ending for the… Read more »

I know how you all feel. We can’t afford cable so netflix is our lifeline. Unfortunately things like Netflix, Hulu and Zune are resulting in less people watching shows when they actually air. The shows arn’t getting the ratings they need to keep them going so they get cancelled.

I found this show on Netflix too. I was so sad when I got to the final episode. I wo wanted to see more. I wondered who the 3 would end up with. Netflix streaming is becoming my way of catching up on a lot of old shows that I never got around too when they were on the air. This show was one I missed but glad I caught now. In my heart I feel Sophie is with Gideon.

I am sooooo bummed that they cancelled this show! I was always pumped to see the next episode! I never recall even hearing about this show until I seen it on Netflix.
=-(

This show was awesome and I can’t believe it ended the way it did. I watched it on netflix and was completely hooked. I am so sick and tired of them canceling the awesome shows and leaving the crappy ones on. They need to wake up and bring this show back.

I agree!! I just watched it on netflix and I am completely hooked!! ugh i want to know how it ends!!

Just finished the series on Netflix also. Another unfinished ending. You’d think they could at least wrap up the shows they are going to cancel.

How did this series end so quickly and The Secret Life of the American Teenager is still going? They really need to come back with this show. I was addicted.

Its not fair cause no one will ever now what will happen next cause it ended!:(

Its not fair cause we will never know what will happen

i definitely agree! i also watched it on netflix and really want to see more! sad it ended 🙁

I just watched this show on Netflix and I can’t believe it’s over… just like that. I mean it’s AWESOME and I can’t figure out why it ended!!!