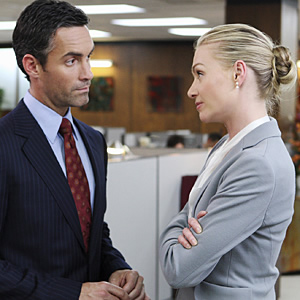 To no surprise, ABC’s Better Off Ted has been cancelled after two seasons on the air. Though it was a hit with critics and a devout group of fans, it just never found a mass audience.

Last May, ABC decided to show some faith in the freshman sitcom and renewed Better Off Ted for a second season. At that time, the ratings weren’t great and they got even worse after the renewal announcement.

When the network began airing the remainder of season one during the summer months, they averaged a terrible 0.74 in the 18-49 demographic and 2.09 million viewers.

For season two, Ted debuted with a 1.5 rating in the demo and 3.82 million viewers. As bad as those numbers sound, they got even worse.

Paired with Scrubs, ABC decided to burn off the remaining episodes of Ted in January. Despite campaigning from some loyal fans, viewership hit a new low for the season — a 0.8 rating and 2.17 million viewers.

The writing’s been on the wall for a long time and realistically, based on the numbers, the TV show shouldn’t have been renewed for a second season. Many in the cast have taken other jobs and the series has now been cancelled by ABC.

What do you think? Many really loved this show but it never attracted a big audience. Why?

I absolutely loved this show. I wish a season 3 would come out.

It was on after lost. So it didn’t last cause lost was such a thinking show after people watched it they had to talk about what just happened never giving better off Ted a chance.

I really loved this show! It was witty and sarcastic. Sad it was canceled, I just found it on netflix! I had never heard of it before, sad it was canceled. Wish it was brought back for a third season!

I think this was a big mistake to cancel this show, we loved it.
Both my boyfriend/husband and I actually “LOL” serveral times during each episode and look forward for the next one. There are very few funny programs and we both thought this program could be the next “Seinfeld”. I don’t who rates some of these shows, but I think this one was completely completely missed rated and I still wish it was on TV even after several years. Complete bummer it was s cancelled program.

Funniest show I’ve ever seen actually. Whoever cancelled this is a loser!!!

Wow . I’m so mad this show is cancelled. Veronica is my favorite!!! Bring it back u dumb asses!!!

REALLY loved this show!! And i wanted to see more about Ted & Linda, now it’s cancelled? ? This show was hilarious in every way and with most things you can relate to the characters – really did not think this show would be cancelled? This was like the Big Bang Theory – good humor & something way different from all the others. We also stumbled upon this show by accident, and we could not stop watching! Never saw an add / heard it being promoted on the radio or anything I agree with Eddy! There is so much crap… Read more »

Agreed being this show back!!!!!

What a travesty. This witty, hilarious, well-written show gets cancelled, but crap like”How I met your mother” & American idol stink up the airwaves. The dumbing down of America continues!

I am so angry about this! Now I have to watch the show over and over.. I love it

Loved BoT,
I live in the UK and it’s the funniest current sitcom around, came across it watching fox one day sad to see it had been canned, i think its main reasons for being cancelled was lack of promotion and advertisement, I think a lot of people have missed out on by not seeing the show for them selves.

I am so dissapointed that this show was canceled. i should have watched it when it was on but i didnt get a chance. Better Off Ted was so my type of comedy, I couldn’t be;ieve how hilarious and refreshing. The cast and writting was excellent really totally awesome. Very sad to know its no longer aired I laughed so hard it about made me cry. That doesnt happen often.

I loved it too, found it by accident. Had never seen an add or any promo & poof it was gone with the duest of fast horses!
Such a wonderful show.