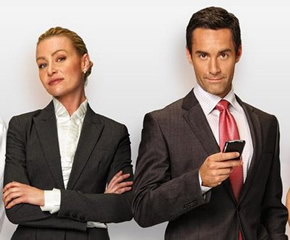 If you’ve looked at the show’s ratings lately, you know that Better Off Ted’s ratings are terrible and the show is almost certainly heading for cancellation. What’s more, ABC recently decided to burn through all remaining episodes of both Scrubs and Ted over the next month.

Still, Better Off Ted wasn’t doing very well last season and ABC gave it another chance. Series star Jay Harrington is hoping that the show’s luck will continue to hold out. He recently spoke with the Boston Herald while in town for the NHL Winter Classic.

The actor believes the show’s the victim of ABC’s good fortune. “I don’t think the network thought they would have the success they’ve had with their fall shows… And they had us kind of waiting in the wings. When those shows hit they didn’t know what to do with us.”

Though viewership hasn’t been very high, Harrington says that Ted’s ratings are “consistent.” He notes, “People who watch it stay with it… Which is pretty good considering a lot of people never thought we’d make it past the first season.”

The cast and crew have wrapped on the current season and Harrington says they all have their “fingers crossed” that they’ll be back for another round. In the meantime, he’s looking for other work and is open to making a return to Private Practice, saying, “That would be fun.”

What do you think? Do you think there’s still a chance that Better Off Ted will get a third season? Is there anything you’d like to see happen before the show ends?

This is the funniest American sitcom I have seen since Seinfeld. What’s going on? Why axe a gem. Big mistake ABC!!!!!!!!

love this show are they crazy to think of cancelling it

This is one of the best comedy’s ever…I hope it come back with a new season.
It’s smart comedy…I laugh through the entire episodes and have taken to using the quotes at work…it’s hilarious to see the real life reactions.

my fiance and I love Better Off Ted. He’s the kind of person who never laughs out loud at anything, and he’s always laughing at this show. It’s hilarious and nerdy. It’s fabulous!!! I really hope that they don’t cancel it.

Better Off Ted is the funniest yet NOT PRIMITIVE series on the WEB right now. It got so popular that the quotes from it are used now in real live ! It is ridiculous that ABC would want to cancel their best WEB show. The distribution through the web is the only reasonable way of getting advertisement to the people as everyone who has just a TV either switches the program or turns the sound off. Short commercials through series (which is as funny as BOT) do not make people mad and the targeting of the audience is so much… Read more »