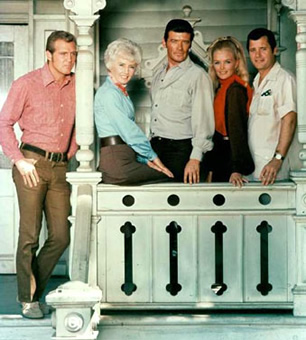 What About Linda Evans as Victoria Barkeley. I agree it cannot compare to the original. But isnt it nice to have a western at least being made

Great idea! Linda Evans would be a great choice to play Victoria.

I have always had a crush over Barbra Stanwyck The Gorgeous tough lady that she was.I was around40,When I began viewing the “Big Valley”: whenIfirst got a glimps of the tiny lady; “My God” I thought; I would have married her;had she would have had me. She had such a determine yet sweet apperence a look on her high cheeck bone face with a small mouth and she tilted her head slightlyin wonder,chills ran up and down my spine “Missy” I miss you LADY…………………

Wow I am so excited of this movie coming. And Lee Majors in the movie even if its small he is still so gougeous. I think they should scrap Susan Sarandon and have Linda Evans as Victoria. I use to watch this as a kid. Now my kids and I watch the DVDs.

Cant wait. Its better than Bonanza!!

Best western ever. A movie would be interesting, but probably be disappointing. It should use the surviving Big Valley stars and fast forward 40 years to what ever year it would be, probably 1900 something and show them as how they would be with flasbacks to the original classic

I LIKE TO MERIL STREEP IN ROLE OF VICTORIA BARKLEY, OR LINDA EVANS IN SAME ROLE LIKE VICTORIA…IN THE ROLE AUDRA(BRITNEY SPEERS) AND LIKE HEAD (MICHAEL OHEANR) BATLLE DOME…BIG VALLEY IS BEST WENSTERN ALL TIME … OKEY REMAKE…

Great show although it clearly was based on Bonanza. Serandon doesn’t seem right. How about Jane Seymour? She is ageing nicely and is a great actress. Brill was probably dropped due to finances. Who needed him when the hunk Heath was such a huge hit. Nicole Sheridan would be a great Audra. Heath could be courting JLO. And Betty White needs to be somepne’s Grandmother. Then you would have a great movie. The four original stars from Bonanza are all gone so they better hurry with this one. The need to do a better job than they did with Miami… Read more »

I think this was the best western of them all. The stories had depth, interest, and plenty of action; the acting was superb by the entire cast and all guests. My personal favorite was always Nick Barkley played by Peter Breck. For me, the show was at its best when he was a central figure in the story. I’m also a fan of Lee Majors. Richard Long and Barbara Stanwick were two of the best as well. Linda Evans was the most beautiful actress at this time and had a strong character in the series. I would have maintained Charles… Read more »

Wow! I am so excited for the movie. I think Susan Sarandon is a great fill-in for the great Barbara Stanwyck. I am overly happy that Lee Majors will be in the movie and I hope the others (who are still w/us) will be able to be in the movie. When I was a kid me and my girlfriend use to watch the repeats(to young to have watch when it first came out) and we were addicted to it!! anyway I am so looking forward to the movie. P.S. I hope they find someone who, for the part of Heath,… Read more »

I would also like to see Mr. Breck, Linda Evans and Charles Briles cast in the show even as minor roles or extras in the background whatever it takes to have them in it. I also hope they plan on casting Eugene and giving him a bigger role than what his role came to be down the road gone. I didn’t like how they exempted him. He could’ve been a good additive. He could’ve been there to give Heath a run for his money. Sandy.

Completely agree with the Rev. Husted. Susan Sarandon is a fine actress, but the
best way to honor Miss Barbara Stanwyck and the rest of the fine cast is to
leave the show alone. The characters cannot be replicated. In my opinion, Its like
remaking I Love Lucy without Lucille Ball. Given the lack of origianlity in Hollywood today, I guess that project will be next.

Love the show, have doubts about the movie.

loved, loved, loved the show!!……the orginal cast will be hard to imitate, they were all so great, and gorgeous too!……….too bad sharon van der knapp is not an actor (that i know of, she’s a model), but her looks, from a photo i saw at a website called majorityrights.com and fanpix.net , seem to be a good match for the “audra” part, originally played by linda evans. she has the same longated face, long thin nose, wide, light blue “doe” eyes (maybe they’re contacts, but they are captivating), and pouty lips………………. i had also read at another website that maybe… Read more »

With all due respect to Susan Sarandon, I cannot imagine anyone in the role of Victoria Barkley except Barbara Stanwyck, and I cannot envision Jarrod Barkley played by anyone except Richard Long! I was a freshmen in college when Big Valley premiered; it carried me through four very special years. My parents gave me a tape recorder which I used to tape every episode, and eventually wore out the tape player listening to those two distinctive voices among the others in the cast. I had been a fan of Long’s since I was six years old. I have very mixed… Read more »

This was a mediocre show at best, enlivened only by Barbara’s ability to work with mundane material. It would be best left on the shelf for all time but I guess not. What’s next, a movie version of Rosanne?

With all due respects, you could not be more wrong! Big Valley was and is a great show. Great cast and stories that have stood the test of time.

At this time Mr. Breck would not be able to be in the movie…. It would be nice to see Ms. Evans and Mr.Briles were it possible. I hope it does not stray far from what the show was, (leaving out the 2000 politics)…there are many of us who loved this show for a reason…so to lose that reason would be a shame. Many of us keep that part alive with the stories we do. And just for the record, Mr. Briles part of Eugene was never really written out they just stopped mentioning him. leaving many of us wondering… Read more »