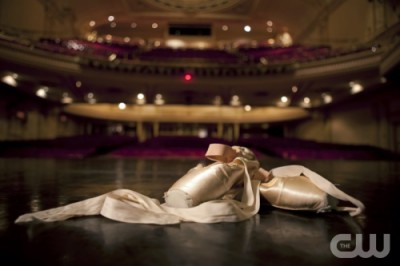 Here are the latest ratings for the Breaking Pointe TV series. This television show follows the behind-the-scenes world of the elite Ballet West dance company in Salt Lake City. The first season of Breaking Pointe typically airs Thursday nights on The CW network.

These are the TV show’s ratings for the 2011-12 season, the best way to tell if Breaking Pointe is going to be cancelled or renewed for season two.

UPDATE: Breaking Pointe has been renewed for a second season by The CW.

Final season one ratings: 0.3 rating in the 18-49 demographic with 0.78 million total viewers.

It wasn’t a positive start for Breaking Pointe but it was pretty much on par with the rest of the CW’s recent TV show premieres. We’ll have to wait and see how it does in later weeks but it seems unlikely that The CW will order another season.

What do you think? Do you like Breaking Pointe TV series? Do you think it should be cancelled or renewed for a second season?

Please renew! I love this show!!

I love this show! Would like to see more actual performance dancing…especially the Petite Mort! Please do not cancel…this is one of the better reality shows on television!

Please re-new the show! They can’t end a season like they did with a cliff hanger haha. This show is the first thing I put on my queue for Hulu and I really like it.

Brilliant should run for years so much potential for expansion/franchise. Give it time!

Love it. Please have another. Whether its Ballet West or another. Love this new angle because both my kids dance!!

This is one of the best reality shows ever put together… and I hope it comes back for another season. It will pick up in ratings if more and more people hear about it. Most people in their life have never known a ballerina. They’re somewhat mysterious because there are so few that make it to the top. This gave me an insight into their world that I would have never had… please renew this show!! I’ll get many more people to watch it!

Love it, watch every episode twice And so do all my friends. We even buy from the sponsors!

Renewed Please !! I personally know one of the demi soloists and shes a gret person !!

I love this show!! It needs to come back. My daughters think is is fantastic and so do I.

There is a petition to bring back the show to CW. See it here:
https://www.change.org/petitions/the-arts-inspire-bring-back-breaking-pointe-to-cw-tv

Please, please renew this. Breaking Pointe is the only reality show I have ever watched.
I do not like reality shows at all. But this one, it is so real life. And I grew up in SLC ,
lived there for 26 years. Please keep it going. And more dancing.

I love the Breaking Pointe! As a ballet person I tuned in for the insiders look at BalletWest. As a regular person, I have been hooked by the drama of the relationships, the prep for performance issues, the heightened drama and conflict as they get closer to performance. Where will Katie end up? Will Rex show some self-respect and break up with Allison? Will she and Beckanne end up having a knock down drag out, as Beck seems to be getting tired of Allison’s drama? Will Adam drop his affable manner and totally lose it with the dancers? I can’t… Read more »

Reader
On the Edge

Like it! Needs more dancing. Would like to see parts of their dance performance in costumes. I love watching ballet and would really enjoy the show with more dancing parts.

I loved it. I am dancer modern/ballet and have been so many years, I love the idea of having a reality show about a dance company. There is so much real drama and insane jealous competive ******* to fight through to even survive. Not to mention the pain stacking hours of physical work and the strive for perfection. I think its a brilliant idea for a reality show rather than some dumb imitation show of an even dumber concept vampire and werewolves in Love with idiot bimbo o my…..

Meh – way too much talk and way too little ballet. And the smarmy artistic director? Even a little of him is too much. A disappointment.