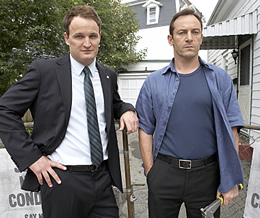 I accidentally stumbled across this in demand and love this show. I was disappointed to find out it was only 3 Seasons. I need more episodes

No wonder it was canned when it wasn’t even advertised or if it was then very poorly, I only found out about this show 4 weeks ago and have just finished watching all three seasons.
Very good

OMG – discovered this series over the Christmas break and am totally addicted. Have watched episodes back to back and can’t believe I hadn’t heard about it before. Its a must watch – currently up to the middle of Series 2!

One of the best shows I’ve seen on tv; another incorrect decision taken by money people.

I just found Brotherhood myself. Completely glued to the tv. I LOVE this series. I never seen any advertising on this. These men are awesome in their roles. I wish someone would reconsider and try this again.

I just found this through my ‘on-demand’ – Did they even advertise it when it first aired? I would like to see more episodes.

I’m very disappointed to find that brotherhood got cancelled. I watched all 3 seasons on Hulu with showtime and couldn’t get enough. And episode 8 of 3rd season was really it? I think they should try again and see if more ppl would watch now

I am still amazed this series was cancelled! I have “showtime” yet it is unavailable through their “On Demand” line-up. At least in my area. Which is one city over from where the show was shot! Imagine, Brotherhood, unavailable to watch in Rhode Island!

Best series I’ve ever seen.cant believe it was cancelled

Just finished watching Brotherhood season 3 on NowTv . It’s a shame they have not renewed the series with so much mediocre tv , especially here in the UK. I don’t watch what you would call normal tv. It’s full of repeats , crap soaps and adverts with the odd decent drama thrown in to try and justify a criminal fee for watching. Now waiting for the new season of Vikings , The Americans , and hopefully a spin off series from Hell on Wheels. GOT seems to be over quicker each season lol, which is testament to how good… Read more »

Please bring Brotherhood back. It is an amazing show with superb actors. Great story line. Please bring it back.

Just finished watching the final episode of season 3 on Showtime OnDemand. I was hooked from the first episode. Wtf are you doing Showtime??? You gotta bring it back. Bring it back!!!! Where did everybody go? Did Nazolli go after them? Way too many questions to be answered?

Freddie got back on side with Nazzoli in the hospital scene

Bring it Back.. please!

There are MANY other choices Showtime would have been better off canceling! Someone should fire the person in charge of its cancellation!